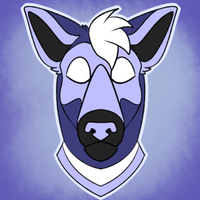 Dizzy is a shy dog that overthinks too much. He likes playing with children and regularly protects them from other dogs. He doesn't really know where he belongs but he feels like he is meant for something else.  He loves collecting shiny things and playing with other animals, and spends his nights alone, wondering when he's going to figure out who he is. He doesn't talk much, if at all. He is curious and intelligent, often solving problems and mysteries for fun. He loves staying up late and when everything is quiet. Dizzy was an orphan dog and a stray since birth. He lives in a suburban neighborhood and is the local stray. He visits his friends in their houses and tells stories to Grapefruit, plays sports with Myrtle, tries the pastries of Bavaria, naps with French Vanilla, takes walks with Pumpkin, and discusses in-depth subjects with Gabe. He does not get along with Dorzon and often has weird dreams.

Dizzy is a tall blue dog with a heavy chest, long neck and legs, and a flat nose. His neck and face are darker blue, and he has a "mask" of lighter blue and a black muzzle, the same shade as his black paws. He has a short, stubby tail and pointed ears, and he has a swirling white design on his sides. He also has lighter blue leg markings that are white at the top, and a scruffy white Mohawk.