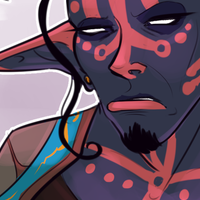 Mid 20s; "Wish I knew myself" (Young by djinn standarts)

Renegade from the lamp of a cruel master, Khagrak spends his materialized life curious and afraid. Disguised from foes and ill will, cautious not to get shackled again. His contradictory ambition to survive and concur led him to into the deepest caves and underground labyrinths where the dark elves - the occult nation of nomads - live. While he accompanied their endless wandering of religious trickstery, he learned simpler magic, he learned cooperation, he learned survival, he matured and stabilized his form, took new name (unintentionally from elvish cook book, which unfortunately means "Horseradish Gravy"). Then, bored by the everyday dark tunnel routine of his new brotherhood, he continued his journey in solitude, putting his skills to hired work and his freedom at risk.

Dolyvos didn't take the best out of his harsh life experiences and neglect of his master. Cold and hardened on the outside, it's like he strives to be regarded as an asshole, seemingly unwilling to make any meaningful attachments or bonds. He treats his comrades with sarcasm, arrogance and treachery, living by the principle "it's either use or be used". Fully aware of dark elves being perceived as skilled yet unstable, unpredictable and dangerous, Dolyvos exploits that concept shamelessly demonstrating his bad temper to keep distance from regular folk (or rather make them want to keep that distance).

And yet, being held in golden cage made him hunger for experiencing the world as mortals do. Hunger for adventure, hunger for dangers, hunger of both near-death and eternal bliss, which led him to various dangerous bounties and sexual experiences.

While having endless conjuring capabilities of djinn, Dolyvos fully understands that using full potential of his powers might both raise suspicion and is overkill in most situations and resorts to simpler tactics learnt from dark nomad nation. Apart from that, he just finds great pleasure with creating things with his own hands, which made him a great potter and tailor.