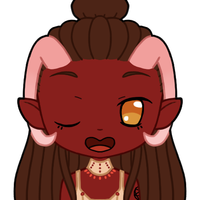 He is a vengeful and independent tiefling. In his eyes, he views himself above the law and has no regard for it. Revenge is his means for justice. Generally, he has no regard for other people either, and will do whatever he can to survive. However, he is not a violent person and uses skills in trickery and deception to get what he desires. If those do not work, he is not afraid of a fight (and has had many). Once someone told him Seduction wasn't a virtue name and he kicked their ass. Due to past experiences he is not easily trusting of others, but when he becomes friends with them he is dedicated. He tries not to rely on friends, even if he trusts them. Surprisingly, he is rather charismatic.

Seduction has red skin and solid colored golden eyes. The skin around his hands is orange, fading up the wrist. He has high cheekbones and slightly pointed ears. Above his brow sit a pair of horns which curl back around his ears, fading from pink to a lighter pink. He has long brown hair with the top section tied up in a high ponytail (pink tips) and two bound thicker strands by his ears (also pink tips); it goes to his mid-back. He has a black heartagram tattoo on his left shoulder and a black pentagram on his lower back, one point down his tail. He has enlarged canines and long, sharp nails. Rarely does he wear a full outfit (he's a pants kinda dude), unless he is working/adventuring. While adventuring he has a tight fitting crop top and a vest, along with shorts (with some really stupid straps on his legs; they do come off but he thinks it looks cool). Overall, there is stupid amount of straps on his clothes. He has a knife strapped to his upper right arm. Some other outfits he owns mimic designs such as these: one, two (part of wedding attire; warning: nudity), three, four (coat kind of). Seduction prefers to dress pretty femininely, but upon occasion he will wear masculine clothes. He enjoys accessories greatly. Seduction has no facial piercings.

Seduction grew up in a coastal human city. Much like similar areas, his status as a Tiefling was looked down upon and opportunities were few and far between. For most of his life he did sex work to get by, not having an education or family. He did not mind his job, even taking on a name to reflect his desires. Seduction enjoyed his home, with it being so close to the ocean which housed his favorite animal: the lobster. When not at work, he would go lobster fishing (to make friends with the beasts). He spent most of his time alone.

While his work generally went well, it happened that Seduction ran into trouble with some potential patrons for being a tiefling. He was left for dead, only to be rescued by a mysterious rogue, who then brought him to their home to recover. In the time he stayed, he grew to enjoy the rogue and decided to follow in their footsteps, becoming their apprentice. In the end, they became lovers and eventually decided to get married. Seduction planned on staying with them, but they were murdered by someone unknown. Seduction is haunted by this event, committing terrible acts to avenge them. He has no guilt over this, and holds no hope for the world.

His desires for power and revenge are strong and his bitterness runs deep. Generally, he will do anything to survive. He goal is to become a god.

Seduction received a magical pet lobster as a gift from his mentor. Her name is Beatrice Leslie and goes everywhere with him. Since she is magical, she does not need water to survive, however she is faster when in it. Also due to her magical nature, she is able to vocalize sounds (though not words). She is a type of Homarus and weighs 30lbs. Beatrice is good natured and enjoys traveling with Seduction; she is carried in a specialized backpack. Unfortunately, she is not much help in battle (but she is very cute!).

Thinks he is very cute and wishes he could see his face clearly.