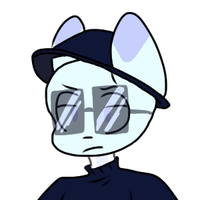 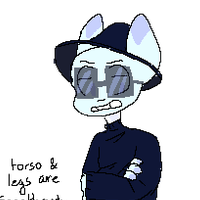 Clear Diamond is one of the most infamous Geode leaders, being one of the strictest and most influential, matched only by Almandine. Snappy, impatient, and quick to get things done, Clear is used to throwing his power around to get exactly what he wants, when he wants it.

He's not violent or sadistic, but if someone's wasting his time, Clear has no issues with getting rid of them and reinstating someone who can do the job faster. His patience for upstarts and revolutionaries is famously nonexistent, and although Clear rules his Geode with much of an iron fist, the entire land is relatively stable and economically booming.

Very few, if any, people are privy to Clear's attitude in his downtimes. That's not to say he's actually a sweetheart under all that hardassery - no, Clear's just as irritable to those close to him, but does allocate them more grace and actual care (even affection?). He's not stupid - he knows that people need socializing and comfort from their friends, and is fine with offering that to keep production up. Yep, just for production and the Geode. No real affection or love at all. Nope. Shut up, Canary.

In a blatant show of power, Clear Diamond abruptly ascended a mortal into lesser god status, the first new lesser god the Pegmatite had met in years. Canary, Clear's protégé (and maybe something more) is the only person Clear actually gives the time of day towards, and has gotten into many an argument defending the other lesser god. It's not obvious to the general populace, but the rest of the Pegmatite are more than aware that Clear acts differently around Canary, and that the two are probably an item.

Of course, Clear was outrageously pissed off that Almandine created Tsavorite afterwards in an attempt to re-assert her equal footing. Clear despises Tsavorite and actually can/will be extremely rude and cruel towards her, often not even acknowledging her presence. And also no, Canary, you are NOT allowed to talk to her.

In his free time, Clear does crossword puzzles and plays trivia games.

Clear Diamond, as per the name, has clear glass-like skin over his torso and legs. Either the muscles, organs, or bones will show through at any time, although usually only the bones are on display. Touching the glass doesn't hurt Clear, nor is the glass particularly breakable, but it is slightly uncomfortable for everyone involved. Clear cannot digest food and will vomit it back up if he ingests it, as he has no genitals or plumbing.

Clear has no hair (on his head or tail) and has light blue diamond markings on his fingers and ears. He wears a large-brimmed hat to make up for this, and a sweater + skirt combo. Please don't forget to draw his massive heels (they bump his height up to a little over seven feet).

He can be drawn romantically with Canary and beside any other Pegmatite lesser god. 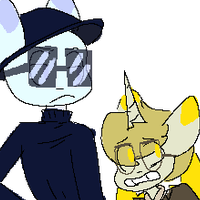 • Favorite color is yellow
• Favorite season is Winter
• No particular favorite memory, but does fondly look back on pre-druzy Pegmatite
• No favorite foods, but enjoys the texture of hard candy
• Strongest sense is touch
• Lacks taste buds
• Right-handed
• Isn't ticklish. Seriously.
• Favorite thing about Canary is his naivety
• Voice Claim
• Sleeps in a massive bed with at least 10 blankets and 20 pillows at all times
• Gets headaches often
• Current reigning champ on all mobile trivia games; gets super angry with incorrect trivia
• Is interested, a bit, in yoga (mostly because Canary introduced him)