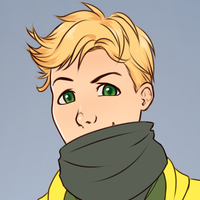 Alexander Rose
Goes by just Alex
Will probably yell at you if you call him Alexander
Male. 20 years old. Gifted

Alex is a healer gifted and is able to heal other people's wounds.  He can heal anything that is alive including animals and plants but he cannot heal himself.  His abilities are restricted to wounds, not sickness.  Sorry, he is not going to be able to help you with your cold.  The more he works with a particular type of injury the easier it will be for him to fix it.  It takes a lot of focus and energy, especially with things he does not have a lot of experience with.  Although Alex cannot actively heal himself his body does heal quicker than normal.  He also very rarely gets ill and is immune to several different sicknesses.  If he were to become sick he would recover from it fairly quickly.

~Appearance~
Alex is at an average height and has a skinny build.  He has short blonde hair and green eyes.  He usually wears a yellow sweatshirt unzipped with a dark green t-shirt underneath.  he wears long blue jeans and yellow, orange tinted sneakers.  He wears a dark green scarf that is always up somewhat so it covers the bottom half of his face.  For the majority of the story he does not have this scarf however.

~Personality~
Alex is very reserved and dislikes interacting with people.  He is extremely paranoid, distrusting and judgmental.  Alex is usually the one at the back of the group, preferring to distance himself from others. He can tolerate small groups but anything larger will stress him out and cause paranoia.  Alex defiantly has some trust issues and constantly thinks that people around him are out to get him.  To be completely honest this fear is not unwarranted.  He lives in a world where gifteds are hunted down and locked up after all.

Alex doesn't have a problem speaking his mind and being very blatant about his dislike for a person.  Alex has a bit of a temper and is easily angered.  He is very capable of holding a grudge and once you get on his bad side it is very difficult to change his view of you. Alex is not one to back down and his issues with anger and history of being extremely stubborn does not help.  He seems to be immune from intimidation, even from those who clearly have the upper hand.  He is known to be extremely difficult to work with and those who are stuck with him have to keep a close eye on him because any chance he gets to mess something up he will.  He doesn't do this because he thinks he could have a chance at escape, he doesn't believe that is possible.  He's made it his life's goal to make everything as hard as possible for any guard or scientist he comes in contact with.

Since Alex is not physically strong nor does he have a gift that can help him in any way he has to resort to using other means.  He has gotten himself banned from practically every object that can possibly end up in his cell.  He has hit people with a lamp, attempted to suffocate someone with a bedsheet and plenty other things. Even after he is restrained he will not cooperate and getting him to do the simplest things require quite a lot of persuasion and threatening.

Alex can be a bit selfish and will probably not put himself in danger for another person unless he cares about them.  If they irritate him or he doesn't know them they are on their own.  This is not the guy to add to your team as the healer, he will probably leave someone that annoys him and make them deal with their injuries on their own.  However this behavior quickly falls apart when his brother, Duncan, is involved.  Duncan could probably get him to do anything by simply asking him.

Alex is extremely protective over his younger brother and the quickest way to anger him is to mess with Duncan.  It is also the easiest way to get him to do what you want.  Alex is completely fine with doing things that may end in getting himself hurt but he will not allow it to happen to Duncan.  Alex will go out his way to make sure Duncan is safe even if that means endangering himself.  He is much more open with Duncan but still will keep some things to himself in order to keep Duncan from worrying about him.

~History~
Alex was born into a very wealthy family and was expected to eventually run the family business.  School was very important growing up. Although Alex did do well it was not because he wanted to, rather he just didn't want to get in trouble with his parents. He found lessons to be extremely boring and had a habit of procrastinating. He didn't enjoy anything he was learning and even though he didn't know what he wanted to do, he knew this wasn't it.  As a child he didn't see any other option though and just assumed his parents knew what was best for him.

Alex was often frustrated and irritable, not the traits someone would look for in a friend.  He did not have many friends and he didn't make much of an effort to make any.  He was the quiet kid in the back of the class that no one really paid attention to.  When he did talk it was usually something rude or telling someone to shut up.

When Duncan was born Alex didn't really pay much attention to him as an infant but as he got older Alex started spending more time around him.  Duncan looked up to him being that he was the big brother and Alex grew to be very protective of him.  Duncan is much more outgoing and friendly but also much too trusting and naïve.  Alex often had to step in and keep bullies away from him and Duncan always had to stop him from starting a fight.

Alex found out about his gift while playing after school in the backyard after Duncan ran into a tree with enough force to break his own arm.  While trying to help him Alex managed to somehow accidentally fix the break.  By this point Alex had already begun to dislike and distrust his parents and encouraged Duncan to say nothing of it, which he did.  Life didn't change much after this discovery, he didn't have much use for it after all and he sure as hell wasn't going to tell people about it.  That was until people learned worldwide of the existence of gifteds and he very quickly realized that meant he was one of them, as well as Duncan.

His parents hated gifteds and although they did not know about their sons, Alex felt very unwelcome and unsafe. As soon as he was able he moved out, he had enough money saved from his parents and was smart enough to get a decent job so he was able to live on his own fairly well.  Duncan stayed with their parents but visited often and sometimes brought along friends.  Alex didn't really like the extra company but didn't have any reason to dislike them so he let it be.  He found out that they were all part of a small group of gifteds Duncan had found.  He didn't know if Duncan told them anything about him but they never mentioned it.

Someone from the group was caught and forced to out every one else which of course included Duncan.  He was able to get away when they went after him but only because Alex served as a distraction for him. He was arrested and later it was determined that he was also a gifted and sent away to the facility he still resides in with no expectation of ever escaping it.  Left with nothing but the hope that Duncan would manage to keep himself safe.

Alex's scarf should cover the bottom half of his face.  It is not just around his neck, it needs to cover his mouth completely.  He can be drawn with his scarf up or with no scarf at all.  Do not draw him with his scarf down!