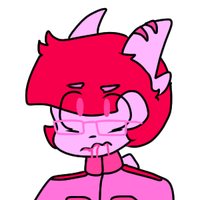 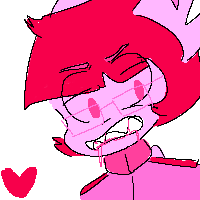 The Tourmaline Empire is, without a doubt, the most powerful standing military in Pegmatite. Its officers? Disciplined to perfection. Its weaponry? The most advanced of its kind. The generals? Well, they might be the weak link, but even their incompetence couldn't falter the Tourmaline military. So, the question is posed: why haven't they seized all of the Pegmatite yet?

The answer is, of course, that their leader is too worried about what he reads in tabloid and gossip magazines to actually rally the troops and go to war.

Pink is incredibly anxious and paranoid, distrusting of anyone and everyone he comes across. Sprinkle on some agoraphobia, a bit of arrogance, and a tendency to prefer Tourmalines over other classes, and mix this with the aforementioned paranoia to enjoy a cocktail of competence that's marred by mental illness. What started as Pink trying to account for the worst of the worst devolved into extreme anxiety about literally anything, no matter how absurd it sounded to other people.

During especially bad bouts of paranoia, Pink is nearly inconsolable and often seconds from having a panic attack. When he reaches that state, the only thing that helps him is Paraiba heading in alone to comfort and reassure him that the worst will never come. Pink hates talking about these episodes and often denies he's paranoid in the first place, playing it off as if he's merely just really good at preparing for anything.

His strategic military genius and field skills are second-to-none, making his inaction all the more depressing. Pink could have very much been an actual tangible threat had he received proper help, which the other Birthstones are very aware of and take steps to ensure he never receives said help. The Tourmalines under Pink are aware of this casual abuse of Pink, but as non-Birthstones, are completely powerless to stop any of it - all they can do is comfort Pink after the fact.

His inner circle is, at least, solely dedicated to Pink, and he does at least feel relaxed by their presence and trusts them wholeheartedly. In general, Pink is much more likely to listen to another Tourmaline, even if they aren't a part of his empire (although he can and will try to recruit them). Of course, that means only Tourmalines are allowed to rule facets within his Geode.

His favorite is Paraiba, of course. Even though Paraiba is a slacker who enjoys the... finer pleasures of life, he's absolutely dedicated to Pink, has made that very clear over several incidents with other Geodes, and knows how to bring Pink down from anxiety attacks. Pink tends to bicker at Paraiba while the latter smiles lazily and nods along, but the second anyone insinuates anything negative about either of them, the other will jump to defend them.

If I don't know you & you follow me you're getting blocked 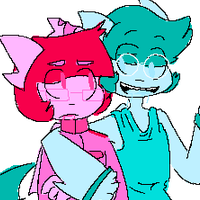 Pink, a Shark, has a large fin on his back and two fins on his wrists and ankles. His tail is long and ends in another fin, with a small notch in the center. His headfins are notched as well, and the right headfin has two scars in its top. Pink has sharper teeth and thicker eyebrows, and constantly leaks Magninium from his mouth. (This Magninium is of his eye color).

He typically wears military-style outfits, especially those with high collars and cuffs. Clothing helps him feel more secure, so Pink wears extremely covering outfits. Sometimes he'll even wear another coat on top of everything.

His hair is incredibly neat and styled. It usually gets messed up over the course of a day by Paraiba ruffling it affectionately, but Pink doesn't mind. He should never be drawn without at least one other Tourmaline at his side.

• Favorite color is blue• Favorite season is Winter• Favorite memory is getting to nestle in a pile of the other Tourmalines at night• Favorite foods are elaborate ice-cream cakes• Strongest sense is touch• Strongest taste is sweet• Left-handed• Isn't ticklish, that's absurd• Favorite thing about Paraiba is his affection• The other Birthstones purposefully will pay someone to write articles on some of the sites Pink reads to influence his decisions• De-stresses by eating entire cakes. Wedding cakes, specifically.• Tends to avoid most media, but does like silent films• Always followed by at least one of his Tourmalines; more often by three or four• Adept at almost all weaponry and makes a point to learn how to use anything newly-invented