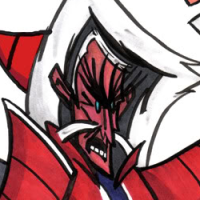 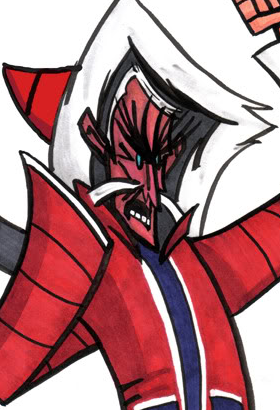 From a minicomic I made in 2011 called KRAKEN, he is a famous Norwegian explorer who dreamed of great voyages on the sea as a child, and grew up to achieve just that: he became world-renowned for traversting the Northwest Passage, discovering the South Pole, and leading perhaps the first expedition to the North Pole. After all that is done, however, he cannot just sit back and enjoy his fame. The Captain feels restless and anxious to get back out to sea-- he has dedicated so much of his life to the chase that he cannot find meaning in a quiet life on land.

Overhearing some men tell tall tales of the legendary Kraken in a tavern, the idea lights a fire in him: not all mysteries of the poles have been discovered, and the elusive and potentially mythical Kraken would be an even greater prize to prove real and capture for his nation.

Spurred on by this furious bout of inspiration, he rounds on The Naturalist, a scientist he had worked with in past expeditions, and despite the other man's strong misgivings (especially considering the alcohol on the captain's breath), he is able to persuade him to join the Kraken hunt on the strength of their friendship, and with the allure of what the incredible discovery would mean to science.

The Captain also recruits The Hunter, a fierce and wild hunter (lured with the promise of how much greater a catch this would be than anything he could dream), to track down the mysterious beast, and the three of them set out by ship for the polar ice once more.

I created the three humans of this comic for a character design class (though the Kraken and the comic were my own thing), and all of them are inspired by trips to the American Museum of Natural History: while the polar expedition team is, of course, inspired by the real exploration teams of the era, the Captain is specifically heavily based on Roald Amundsen. I'm pretty sure the real man never discovered a Kraken, though-- but he did disappear mysteriously, so who knows, maybe he too was saved by a mysterious beast in the ice.