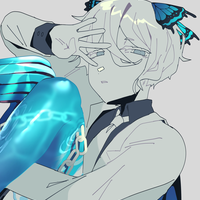 a dainty who was struck by the misfortune of becoming a host to an otherworldly butterfly-like parasite that lives on his spinal area. he works a dead end job as a secretary of a company, and only finds enjoyment in trivial things to keep him from the harsh reality he’s in. he wants to blend in with the crowd so he often covers up his legs with an accessory on top. when he’s nervous, butterflies emerge anywhere from his body, but mostly from his socks. occasionally his parasite may overtake him which can trigger the ‘fairy king form’.