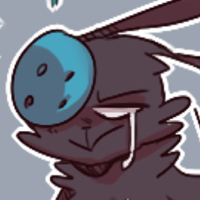 Former demonic King who ruled over the human world, but got stabbed. However, his is soul was still alive, so he was able to find another dead body and posses it. His strong demonic soul would've destroyed normal human bodys, so he was forced to posses this little pitchbringer bunny. His personality got mixed up with the bunny's crazy mind.

•No one believes him this story, so he stopped telling it. Hes fine with his new life, its more entertaining to him.
•He knows everyone, he's practically the god's son.

•Everything about his past seems so surreal, and kinda dumb, imagine a stupid little bunny's trying to tell you he's been a king in his past life... His new personality isn't fitting to this at all, another reason no one's  believing him. He seem's like a bad ''asocial'' person, but he's still acting too neutral for anyone to hate or judge him.
• He's acting neutral but he's still judging. He's my background rpg character to get conversations running, knowing anyone and everything, he might be able to help, but he doesnt, cause he loves to just watch. Watching others to live is like reading a book or  watching a movie to him. It's his only purpose in life anymore.
• Calls everyone ''little one'' or ''young one''

•Got Hyphema (DONT GOOGLE ITS DISGUSTING)(EYE GOT PUSHED BACK, BLOOD FILLED THE EYE, BLOOD DRYED, BLACK EYE. In his case white eye)
•His blood is blood, his tears are blood, his saliva is blood, etc..
•White blood. Only thing he's got left from being a king.