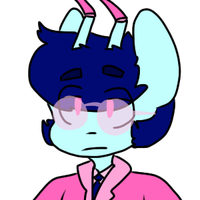 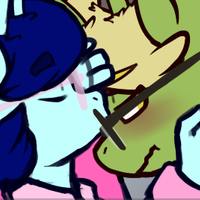 Arginine is the leader of the Amino Acids... or, as much of a leader as can be. The others think of him not exactly as a cruel or unforgiving leader, but as a firm bastion of order. Arginine, to them, is not a friend, but a guardian.

Really, though, Arg wishes that things would've turned out differently. It's just - the Aminos are maniacs! They don't do any work, they squabble amongst themselves like meutins and dragonids, and worst of all, they don't give a shit about anyone but themselves. Someone had to bring order to this chaos, and Arg knew it could be him. All he had to do was wear the mask of a cold shoulder, and wear it without fail.

It took years, but he gathered blackmail on each and every single Amino. Some of it was more mundane than others, but all of it was enough to wrestle the others into line for fear of their deepest, darkest secrets being released to the public. This was enough to keep the peace, albeit an unsteady one. It was okay. Arg didn't mind working all-nighters most of the week to pick up their slack, as long as he could dedicate some time to trying to reform the assholes in the group.

Little did the other Aminos, know, that Arginine was aggressively polyamorous and spent what little free time he had flirting with and dating a multitude of mortals. Without the weight of keeping peace on his shoulders, Arginine is bubbly, excitable, playful, and very, very sweet. In fact, he's more than happy to play (harmless) pranks on those he loves to cheer them up or get a laugh out of them - it's almost like Arg is an entirely different person, a loving, adorable sap.

And if that deeper layer wasn't enough, underneath all of that is a man with incredibly low self esteem. Feeling as if he's not good enough because he's unsuccessful in 'helping' the more cruel Aminos learn to be better people (Leucine and Isoleucine, mostly), Arg can't help but wonder if he's a complete failure of some sort, unable to actually make anyone happy or make a difference in their lives.

Luckily, though, he has his darling Aspartate to cry into his shoulder and comfort him. Arg isn't sure he believes the whole "god-king-dictator" thing Asp has been planning, but Arg takes him very seriously every time Asp brings it up and dedicates great hours to listening to Asp rant and rave. Of course, Arg would've never imagined that all the time he'd dedicated to Asp would pay off in a sudden crown on his head and a seat next to Asp's throne when the entire Endoverse governmental structure was overthrown.

Arginine is an Ant, so he has four arms, a small, fat tail, and two feelers coming out of the top of his head. The feelers are extremely sensitive and are used for pheromone communication between Ants, so he's very private about who is allowed to touch them. He has the sharper teeth mutation. He has very thick eyebrows!

His day-to-day dress is a pink suit with lighter pink trim and framesless glasses. For less formal events, he'll wear nice, expensive silk clothing that Aspartate bought for him (so he ends up dressing formally anyways). In later years, when Asp has become the dictator of Endoverse, Arginine wears the silk robes all the time.

Usually, Arginine looks cold or irritated. However, if he's around someone he trusts (his partners and/or Aspartate), he's very lively, silly, playful, and energetic. He will gladly kiss anyone who has a crush on him (or on whom he crushes on). 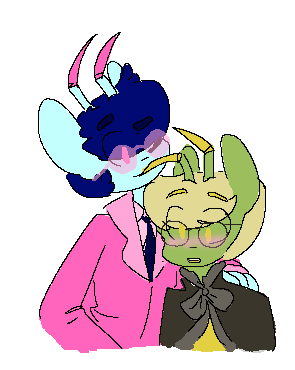 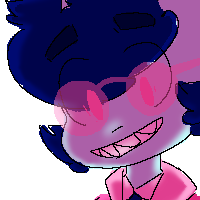 • Favorite color is pink
• Favorite season is Summer
• Favorite memory is the first time he and each of his partners said "I love you" to each other
• Favorite foods are jelly donuts/creme donuts
• Strongest sense is smell
• Strongest taste is sweet
• Right-handed
• Is ticklish pretty much everywhere
• Favorite thing about Aspartate is his genuine affection
• Puts sweetener & sugar in his coffee, but nothing else
• When nervous, rapidly taps his pen against the nearest surface (usually his desk)
• Reacts poorly to messes and neurotically will pause his work to clean them up
• Often works long weeks/hours/etc., both out of a lack of self-preservation and dedication to helping out
• Is well-known among mortals for being flirty/poly
• Has a collection of sex toys (no, seriously), and also of his partner's underwear (it's an inside joke thing)
• He's fluid-bonded with Aspartate, but not with anyone else
• Actually is quite relieved when Aspartate takes over and his initial fears about not being good enough are quelled