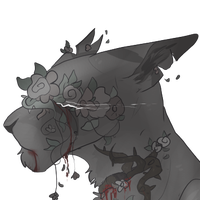 Ashblaze is the warrior of many names. Though she is most commonly just referred to by her true name or “Turnclaw”, she is also known as Grimm, and to the long distanced FallenClan her spirit is known Only as “The Wanderer”. Her prefix 'Ash’ is representative of her grey coat and how it stood out during her birth against the blood. The suffix 'blaze’ was given to her for her personality and spunk on the battlefield, one of the only kindnesses she's ever been shown. She is one of the most deadly cats ever known to PineClan and the Rogue Clan, and is deeply respected by almost every opponent who knows her true strength. It is they who give her the nicknames "Warrior" and "Soldier", and Juno, leader of the Rogue Clan, in particular addresses her as "Turnclaw's Daughter", "Daughter", and "Rogue Princess", sometimes even just "Princess", monikers she hates but puts up with out of necessity.

Ashblaze is and always has been a spitfire, a cat whose emotions run hot and close to the surface. For a Turnclaw's Kin, this is a particularly dangerous personality to have, and Ashblaze has received many and more punishments for speaking out of turn and making comments she simply should have held back. As she has gotten older, her ability to hide her emotions and keep them tempered and even close them off completely has grown immensely. The young warrior who once could never be silenced resides in almost complete muteness, her voice turning cracked and raspy from disuse and mistreatment. When she speaks, it is most often only to repeat certain phrases to show her loyalty to the clan or emphasize her place, which is why she so often would tell Cinderkit that she was "the daughter of a traitor, unworthy of company or companionship". Painfully, dangerously brave, she has turned almost suicidally disconnected in relation to her life during battles, and deadly apathetic in other areas of life. The emotions which once burned under her skin so strongly that she could do nothing to hold back her words no longer rise at all, and she simply lives her life as a routiene- wake up, patrol, kill whatever asked to, sleep again.

Under the surface, she cares very strongly about right and wrong. She has a moral code that, though deeply hidden and constantly forcibly overruled, causes her to question the things she does when she has moments of clarity and mourning. She wonders, treasonously, if she deserves the punishment she receives for her father's betrayal, wonders if the cats she's killing are deserving of their deaths, wonders if the words on the wind that she hears from rogue whispers may have some truth behind them. She never voices her thoughts, never does so much more than think them and then hate herself for thinking them, but they are there... tiny seeds of doubt that bring her mind unrest in the darkest of nights. She is also, somehow, inexplicably, naive about much of the world. She knows the consequences to each of her actions better than any warrior, but she has no concept of friendship, of love or connection. She does not understand what it means to love someone so much to give her live for them without thought, does not understand what it means to want to protect someone with every fiber of her being... she knows only hate and fear, anything else that comes her way she believes to be a trick... to be a betrayal waiting to happen. Her soul has been warped to hatred, mistrust, and fear... anything she sees she knows could be a trick, knows could be used against her to punish her for imagined wrongdoings or made up failures that allow PineClan to show all who live under their rule what happens to Turnclaws and their family. When true kindness is shown to her, there will be nothing to stop her from falling completely under its spell, without a second thought.

"Everyone must pick their battles. I promise you that this was mine."

Ashblaze's story begins with her kithood. Her father, a warrior name Shadowfang, had taken a mate who was named Finchsong. Finchsong and Shadowfang were thrilled to be expecting their first litter, but tragedy struck when Finchsong ran into complications with her labor. It was a long labor and she bled far too much even with the raspberry leaf the Shaman kept feeding her. Weakened significantly by this, when she finally delivered her only daughter, she had not the strength to finish cleaning the little kit off. She died curled around the small grey kitten. Shadowfang was left mateless with only his daughter to provide solace, and he named her Ashkit for the way her grey pelt stood out against the red of her mother's blood. Shadowfang remained a large part of Ashkit's life, consistently visiting her and feeding her every tidbit of knowledge he possibly could. It was obvious he was very happy being a father, and Ashkit adored him. She had no consistent mother figure, simply suckling off of random queens before she self-weaned at an early age.

Cinderdust Ashblaze's only companion, her cousin and apprentice. Cinderdust took to Ashblaze when she was only about a month and a half old, and hasn't left her alone since, much to the clan's disliking. Ashblaze would do anything, absolutely anything, to protect Cinderdust, and when this is put to the test she comes through.

Juno Ashblaze's arch nemesis, and eventually her greatest hope for redemption. Juno constantly harasses Ashblaze with nicknames and taunts, but despite this when push comes to shove, the rogue lieutenant is there for her when no one else could be.

Shadowfang Ashblaze's father, who she hates more than anyone else in her world. He is the cause of her rank as a Turnclaw's Kin, and not only does he abandon her for a rogue clan and a bunch of ‘spirits’ in the night sky, but he has the audacity to pretend he was always looking out for her and only had her best interests at heart. He is the ultimate cause of her death.