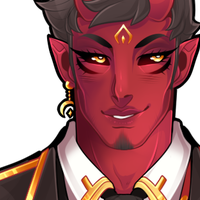 Since the beginning of time • no zodiac • Of death and endings

What is this I see?
Cold icy hands over me.
He said, "I am Death no one can excel.
I open the doors to death and to hell."

Muerte was a god plagued by humanity. Initially reluctant to even consider his universe anything beyond his duty, he has grown a heart of marigold deep within the void of his chest when he realized that he'd rather his world live than perish into oblivion. It's his immortal belief that he can push against Fate's design that wills him through abandoning his family and sacrificing himself for the sake of his world, and its that willpower that transforms him from the belligerent, wrathful and merciless death into the fair, benevolent and proud mayor of Wisteria. He takes the role of a leader to many, with some even testifying that he'd make a good father as well. His tone and attitude can both bear the bloom of a rose and the prick of thorns depending on what he thinks of you and your demeanor.
Despite him becoming something close to human, one should never doubt him or his power; as kind as he is, Muerte never turns his eyes away from the cruel truth of things. He isn't willing to bend rules or provide reality-breaking services out of kindness. He has rules to abide and laws to follow, but so long as you heed his words and avoid squandering the time spent with him, Muerte will help you with your plight. However, take his kindness for granted or be so bold as to beg for death and he will leave you in the shadows to rot.

Fate is the mother of all timeline and realities, her existence solely to create and create and create some more. To dance in between streams of existences and to see just how the strings would die upon her divine fingers. One thimble for one universe, another for the next. She continues to weave and make worlds anew to this very day. This universe was also of her doing.

"I shall make a world of where only three gods reside over it. Vida, of life. Alma, of soul. And Muerte, of death. They shall be the gods of the realm."

As she molded the clay in her hands, carving eyes and poking in mouths, she gave them three gifts: a birthmark of her design, earrings that were their chains and a wish that was to be granted should they break both rules and become erased from their string of fate.

"Of your existence, there are two tethers that are not to be broken. You are to never reveal yourself to your universe. And you are always to be believed in."

She left them to take care of the new existence they were given, uncaring if they would implode upon themselves or if they will continue to last for millennia. And so the three brothers created this world and fed it their lives and their love, witnessing eons of history and war, of strife and compassion, an ever-lasting cycle that was of their doing. They had no influence, only to give power. People died, people lived, and they died again and cycle. It was nature. It was fate.

But soon into another cycle, something was amiss. Suicide rates were at an all-time high. People were being killed left and right due to injustice. The world was suffering, dying, writhing in pain as humanity had begun to sweetly pull the plug on its life support. For divine brothers and otherworldly patrons of the universe, this was expected. Worlds die, they revive, and everything cycles into place once more. Millennia prior dictated it so, and millennia after would echo the process.

And yet, even with how the world turned and even with corpse upon corpse piling on top of each other, there was no satisfaction. There was no gratification. Death was meant to be feared, loathed, respected, expected. But when sought out as an escape, when romanced and lusted after and yearned for, that was when the reaper of myth and lore had decided that there was something wrong.

Muerte knew of his place; he was a God, yes, but not one to appease and to love. He was not an image of worship nor an image to celebrate. He was the shadows as the ghost, and the most recognition he should get is either people coming to peace or people scorning his name. And yet when he reaped for souls and found outstretched hands yearning for his touch and grace, he felt sick and repulsed. Disgusted, almost.

"They will die out." echoed Vida.

"This will come to pass." said Alma.

"The cycle will repeat." whispered the unspoken truth.

And so of his own guidance and of his own developed stilled heart, Muerte did the unthinkable. Feeling the burning sensation of his left ear as his earring broke out of existence, he left his brothers to personally help the world that was slowly killing itself.

He took a corner of the world that was hidden so far gone that no one would be able to find it. He took this corner, enshrouded it with shadow of decay, and made it so that no one who was not ready for it could stumble upon the land. No, this was meant for those outreaching hands that wanted death's kiss, this was meant for those who wanted to abandon humanity but not truly die.

His brothers were angered at the betrayal but chose to be passive. The cycle would repeat regardless of what Muerte would do, so why not let him vent a bit? Let him try and see if his proposed answer would indeed influence the flow of fate. Death knew that he would have no support in his endeavor, but even as he was forever excommunicated from his family he still found solace. He found a sense of peace where he could try something new. Let decay come to him, let his throne be moral, and let the small seed of humanity that was planted in him flourish as he took fate by the reins and tried things his way.

Humanity in and of itself was sick and dying, and humanity's cycle needed to be reborn.

Wisteria was the way that it would happen.

WHERE THE STORY IS NOW 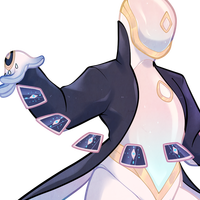 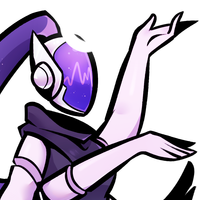 Waka was the first to have made Muerte laugh while on his throne in the longest time. He awarded the soul with a piece of his bone, thus creating Waka into what he is today. Waka is someone Muerte can count on, order around, and live through with being able to see through his eyes and hear through his ears and speak through his mouth. While the bond is unspoken, if one is perceptive enough they can see somewhat of a father-son bond between the two. But like hell if you'd get either or to admit it.

His name changes depending on the language spoken, but with his current vessel/smol form he defaults to Muerte or Death.

When people initially come in contact with him, they would note his marigold-like scent and atmosphere. As people become more accustomed to being around him, there is a more rotten smell to him. ( HeartlessSpade )

The man running Wisteria. Is more powerful than he lets on.

"This isn't even my final form! It's actually not even close to my second or third form either;;"

He's edgy but like, not in an embarrassing sense.

The reason why he has only one earring is important. He used to have two. It is also related to the mark on his forehead.

He's literally the spirit/god of Death. Like, the whole scythe and robes and skeleton thing. In his universe, all beliefs of death all result to him.

The two slits under his eyes are also eyes. He usually keeps them closed but they tend to open up and glare when he does.

He's enlisted in four Agents of Death to help him with the mortality rate of his side of the planet; Haru as War, Waka as Death, Hera as Plague and Lis as FamineDeath's goal is simple; to kill humanity but pacifist-like

Muerte can only, canonically, be killed by two means: