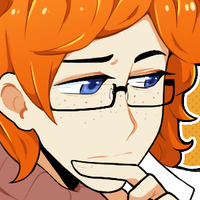 Cadet is Viktor's older brother who lives on his own. He's a very sweet guy but also very quiet around new people until "video games" are brought into a conversation. Cadet absolutely adores video games of all kinds and after working at the office for hours, he spends a lot of his time playing at an arcade near his apartment complex and has a ton of different game systems in his home. He loves talking about his favorite games or how far he is in a certain one. It's either the arcade or at his apartment that he spends the most time in. He rarely speaks to people but even more so he became so isolated after an incident that involved an old lover.

His old lover, Finley, and him were happy together and kept their relationship a secret, since Cadet and Finley were quiet about their sexuality. They really loved each other. The only problem was that his boyfriend at the time had a lot of health issues. Cadet watched over him a lot and made sure things were going well until one day Finley had to be rushed to the hospital. This was the last time Cadet ever saw him alive as Finley had passed away at the hospital. This made Cadet so distressed and broken he isolated himself from people. He told his parents that Finley was a "really good friend" to avoid telling them of their relationship they had.

Cadet almost lost his job but picked himself up after awhile. Though he's still rather quiet and looks towards video games as a way to escape the reality and not just playing for fun anymore. He still keeps in contact with Viktor every now and then. Viktor really worries about him with how distance Cadet is.

It's most likely will be a little challenging for him to get close to people, but he'll warm up to people over time if they are someone who actually try to talk to him a lot and get him to come out more often to enjoy life again. He'll also warm up to people who share the same interest as him with video games.

Cadet refuses to drink alcohol 80% of the time though sometimes he'll catch himself at a bar once or twice every month and never really understand why he returns every once in awhile.