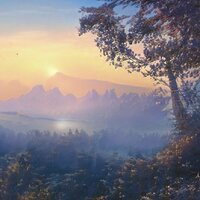 Also known as Nepheland, Nebel/Nebelas, the Realm of Niwl, and Nilfula, Nephos is one of the several afterlife dimensions a dearly departed soul may arrive at. Specificly, it is for animal and lower sentience spirits, including any form of prey, predator, decomposer, and plantlife.

Nephos is characterized by its beautiful, if sometimes unsettling, mist and fog (known as simply Fog, or Nephog). It's properties are fueled by the moon cycle, being the most thick and powerful the night after a full moon, and weakest during a new moon. It's powers are mostly for healing the newly arrived spirits from whatever killed them, so when they awake in Nephos, they feel no pain. If exposed to a hotspot of the fog, said hotspots named Vaporfields, Vaporwoods, and Vaporshores for each of their biomes resectively, for a prolonged amount of time, a spirit can have their memory wiped by their own consent (so no forced or accidental memorywipes are comitted), so they can start a "second life" without the weight of their moral one. This can also come as a curse, as some memories always live on in the soul in the form of flashbacks, hallucinations, and dreams.

The fog has other supernatural properties, such as granting abilites to the creatures who know how to use them. Trees may grow to tremendous size, bugs may glow similar to fireflies despite having no biology capable, animals may develop physical adaptations or powers that would otherwise be impossible. It is proven that creatures have their sentience inhanced by their first breath of the fog whenever they appear in Nephos.

The fog is said to be the barrier between the mortal world and Nephos, others just believe Nephos has an end, similar to a Flat-Earth, and has either a forcefield protecting from a drop, the landscape forms a sheer, upward wall, or nothing at all. If so, there is nothing stopping a spirit from simply jumping off the edge into a void, only to reawake in Nephos. Or, it could just be the same shape and size, maybe even larger, of Earth. No creature has bothered to actually travel that far.

Nephos does not operate on a morality scale, and so creature of any background roams the dimension. This has caused corruption in some parts of the dimension as some twisted creatures are given sentience.

(don't mind spelling errors and that jazz, I just needed to get this all out before the ideas left me :) )