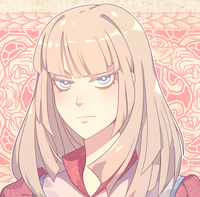 Orobelle
I can't believe she doesn't have a character sheet yet
A character from my ongoing web novel, Revolving Door!
Personality

Orobelle is the most important person in the universe. Her fate is bound to reality's, and she bears the task of keeping it in existence. Her death would spell doom for it all.

And she certainly acts like it. A spoilt noble to the highest degree, she was raised to be the perfect Duchess of Diamonds—impossibly important, full of conviction, magnificent as the seat she was to fill. As the heir to a momentous birthright, her parents made certain to impress her superiority-by-birth upon her. Unfortunately, lessons aren't always learned the way you want them to be, and she has become a right entitled brat, cocky and demanding, throwing around her forceful personality for the pettiest of reasons. She is prone to tantrums made worse by her pride.

Barely concealed beneath the arrogance she inherited from her parents is a bottomless well of paranoia and insecurity that come with being the subject of intense scrutiny and covetousness, as a duchess and the bearer of a cosmically crucial duty.

Shrewd but reactionary, Orobelle often does not act unless she believes she is under direct threat, preferring to do whatever she pleases, her choices isolated from others. She is the centre of the universe, after all. She has a partiality to frills and lace, and shades of pink and pastel blue. Diamond motifs are an expression of her power, as well as her house's.

From birth, Orobelle was meant to lead the House of Diamonds to glory, and her parents arranged the circumstances of her birth to ease her eventual ascension to the throne of the Hearts. Her mother Adamanta saw her as a pawn to a strategy that would secure the House of Diamonds' victory over the Hearts, and groomed her as such, teaching her to hold herself like a duchess and to shed compromising bonds as fast as they formed.

Through their manipulating, Orobelle was accorded the Knot of Worlds, and with it the monumental task of keeping the universe in existence while she was still in her mother's womb. The nature of this duty is such that she cannot ever be killed or allowed to come to danger, becoming more a prize than a person. This was a role that they had hoped would award her unquestionable legitimacy as the new Queen. This grand plan was left in shambles when both parents were assassinated.
Relationships
Facts
View More