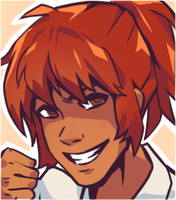 Memorialisation is a song written from Ruthenia's POV. It's kind of a spoiler?

Once Ruthenia wants something, there isn't a thing in the world that could stop her getting it: not the law, not the gods, not all the forces of nature conspiring. When she's set on her goals, she descends into severe tunnel vision, becoming incapable of contemplating alternatives, the feelings of others, or the possibility of turning back.

Because she grappled with the system for the very chance to stay alive, Ruthenia abhors anyone who enjoys privilege by birth or power unearned. She doesn't care what title you have, if you were king of the world or even a god. You're only as much as you can prove, in the arena of her choosing.

Her social life is nonexistent. She has no friends (she doesn't want them...does she?) and the only ones who spend time with her do it out of pity. Despite having more detentions under her belt than any other, her teachers can't make an example of her because she's their best physics student by a mile: she's so smart it's unfair to the kids who've been diligent all their lives. But she's incapable of saying anything but what she means, and often with the tact of a fist in the face. (It's the leading cause of her landing in trouble.)

Except, of course, when it comes to her kinder feelings. Then she's on full defense, incapable of giving voice to her thoughts. Closeness and affection terrify her, and she will recoil at the first hint of devotion she didn't ask for.

Hidden by this hair-trigger personality is a past she refuses to think about, and a huge chip on her shoulder about her biological parents' deaths. She is convinced the only way to do right by their memory is to finish their work. She has a strong but misplaced sense of justice, habitually seeking to paint heroes and villains in every conflict. She subscribes to rigidly-defined morals on which she is always more than eager to act.

She has developed a bundle of coping mechanisms that involve pathological defiance and a tendency for recklessness, broadly seeing the meaning of her life in terms of her ability to serve a purpose: that chosen purpose is the downfall of those who perpetuate the same injustice that did her parents in.

She was always in proximity of academic material on engineering and material science, and began reading their textbooks avidly from a very young age. But because of their all-consuming devotion to their work, she often went through long periods of neglect, sometimes locked in the attic to keep her hidden from professional visitors.

That neglect reached its logical conclusion when both parents were martyred, after their project was deemed in direct defiance of the word of Ihir (God of the Sky) and the then-diarchs signed a law condemning them to death. This event kickstarted the backlash that eventually saw the then-diarchs ousted, and thereafter her parents were known by all as either revolutionary heroes or treacherous heretics. Shortly before they died, they gave Ruthenia the umbrella that she has since learned to fly upon.

Parents' property reacquired by the government, Ruthenia took to living on the streets for four years, until she found herself at the door of an old family friend Titanio. Titanio gave her employment as a mechanic, and guardianship, in a contract combining the two. By his financing, she is now enrolled in an uptown school in the Central Circle, where she meets and spurns the highborn on a daily basis.