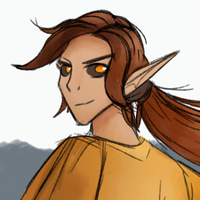 (Character made for a roleplay with close friends, don't except her lore to be ES-lore-friendly)

Born in Solitude, she always had a passion for Dwemer ruins. To get closer to them, she moved to Markarth against her family’s wishes. Instead of archeology, however, she found work as a priestess of Dibella and now lives at the resident temple to the Divine of Beauty. She is more focused on spreading the love of nature and promoting the Green Pact (as she still is Bosmer and refuses to eat/harm green life), but she is well-known to explore the more “exotic” forms of “worship.” Many in the city don’t trust her, claiming her Bosmer practices link her to the Forsworn’s lifestyles, and therefore typically found within the temple.

Her parents moved out of Skyrim at the start of the civil war after facing prejudice, leaving her alone to make her own path.