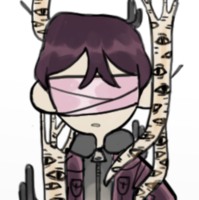 May troubles be far from your mind, and forgive me for being so blind.

Cecil has very pale skin and a slim figure with a short stature. His hair is a short dull purple, with two ahoges sticking out. His eyes are opaque and cloudy, with thick feminine eyelashes. A pale pink bandage is worn across his eyes, often his signature look. Cecil can be seen wearing very common winter clothing, though he is never seen without his purple leather jacket. Aspen trees are often growing out of his body.

Cecil was blind since birth, all his life he had dreamed and hoped to see the world. One day he came across a wood nymph, the creature said to grant him the ability to see. Unknowing of the creature's intentions, he accepts. Trees then grow onto his body, growing eyes all over. The more and more eyes grew, the more Cecil could feel himself lose control of his own mind and body. Slowly, there was no more Cecil. Just a soulless tree boy ready to attack any creature the wood nymph disliked.

Once he became mindless, he possessed a new quirk titled "Aspen Eyes". He can summon trees from his body or the ground, these trees then grow eyes and serve as his new means of seeing. With this ability, he can see all around him, from down to the ground to high in the sky. Cecil is also capable of creating a large mass of trees, using it to attack. Cecil is VERY weak to fire and bright lights, if exposed to such, it'll cause his trees to revert back into him meekly.

Eventually, Cecil ran into a rescue team and had many feuds with them. Attacking them each time, injuring himself and them in process. Overtime, the rescue team was able to locate a soul within the monster of him. They then made it a operation to restore him to his normal human self again. After trial and error, they were able to return Cecil..but none of his memories. Mortimer is Cecil's main source of love, support, and happiness. With the two of them together, they are quite literally a power couple!

Dent gave Cecil a chance to prove himself to everyone he's harmed, trusting Cecil instantly. Cecil greatly appreciates his act of kindness.

Cecil knows how awful Kuro feels, and will try his best to be a positive figure for them. Being strong for Kuro.