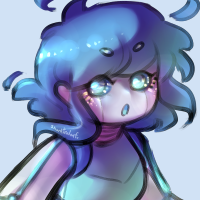 Bitty was manufactured by an unknown factory that she can't seem to get a hold of. She was sold off to a human. Once she awoken, she became a servant to her human.

After years, the owner decided to upgrade to a better bot. Thus abandoning Bitty. Hurt and confused, she slowly malfunctioned and deteriorated. In the midst of all this, someone new came into her life and took her in.

Bitty is now roommates with her new friend, and is treated even better than before. She's still getting used to all the love and appreciation!