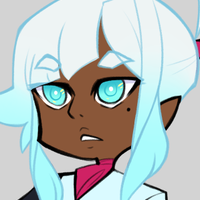 Weapon: An archer’s bow named Arcadia. Its ammo consists of energy based arrows that manifest when drawing the string. When two are combined they create a maestro’s baton that can manipulate objects with psychic like powers and is a highly effective amplifier for magic.

Rank I; Fallen Angel.
Sin: None (explained below.)

Personality:
A soft spoken boy who’s too kind for his own good; kind enough to the point where he will feel guilty for asking a favor over something petty. He gets easily flustered with the slightest praise and will in turn praise back tenfold. A bit naïve, opening himself to opportunities where he can be easily picked on which causes him to freak out thinking he may have said something wrong. With the patience of a saint combined with his nurturing nature makes him a great parental figure and is often seen around children if given the chance. He’s a tough one when disciplining children, though, and will make sure they learn their manners. Despite having a soft exterior he’s highly disciplined and strictly abides to the codes of chivalry.

About:
A Northern Heaven angel that was framed for treason from an envious individual. After he was kicked out, he was banished to Daten City. The farther away he was from the North, the better. He struggled to integrate himself in Western customs and was nearly captured by bounty hunters for his status as a traitor. After a lot of yelling, he was finally settled into a group of Heavenbents and Angels called the Crusaders who meddled with Demons in the Daten Underground. He distanced himself from the group somewhat and became a breeder for Ziz and its variations.

·         He’s trying his best to fit into modern society ever since coming to Daten as he feels out of place with his way of speaking and clothing.

·         A big bird enthusiast; he’s fascinated by the significantly smaller birds Earth has to offer as Heaven’s birds tend to be enormous.

·         He can actually conduct with the baton he’s able to summon. When no band is present, he is still able to play the baton itself as an instrument and is said to make very beautiful sounds. Aside from baton conducting and playing, he’s also able to play the harp, flute, violin, and cello. These instruments are considered sacred in his culture.

·         His sexuality and romantic orientations are Asexual and Aromantic.

·         Tunic is able to speak Finnish, Swedish, Danish, English, and German. It is a requirement for his culture to know these specific languages as his region’s biggest trading partners on earth are mostly American, Nordic, Scandinavian, and German. Finnish is the mother tongue for his culture while Swedish and Danish are considered somewhat sacred languages as they are seen in holy books.