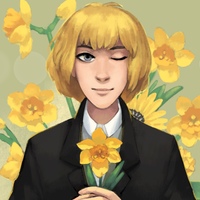 Felix is a cunning entrepreneur who always knows which way the wind is blowing. With his silver tongue and beguiling manners, he could persuade, or fool, even the most unyielding.

Heir to a huge estate and the beneficiary of almost every form of fortune existent, he has known little hardship and, as a result, has developed the sort of confidently outgoing attitude that only one who's never had to fear anything or anyone would. He treats rules and structures as flexible, and frequently talks or bribes his way out of trouble. He is broadly unaware of the ways his upbringing has skewed his view of the mutability of people, rules and organisations.

Felix is as gentlemanly as his family and social position require of him—a perfect husband, to those of his culture and era. This personality is not all put-on, either; he is considerate and tolerant by nature, and he does his best to be sympathetic, although it sometimes becomes clear that his sheltered upbringing has narrowed his ability to sympathise.

He is lukewarm and deliberately opaque about his interests; he doesn't seem to care overly much about anything in particular—other than, perhaps, the people he loves.

Felix was born in London to parents with noble forebears and a large estate on Kensington to their name. In their childhood, he and his brother Jasper learned businesscraft at home and studied at Westminster School. By his teenhood, Felix was already in possession of investments in trade ships on the Atlantic, with enough wealth to his own name to buy his own townhouse.

While he was quite baffled when he learned of his ability to manipulate light at the age of eleven, he did live in a time of scientific wizardry and the impossible made possible, and it was not a cause of much alarm to him. He was remarkably good at using his powers in subtle ways that did not draw any suspicions.

Close to his nineteenth birthday, Felix bought his way into the passenger seat for the inaugural trip of the Tunnel Machine—a newfangled device funded by his father's investments that was designed to transport passengers across the Atlantic in under ten seconds. Things did not go as planned, and Felix found himself stranded far away from home with no apparent means of returning.