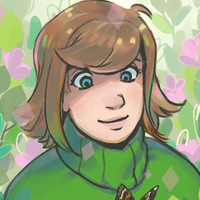 Adelaide is a big ball of nerd, confusion and nervousness. Life in isolation, without the chance to learn of social norms, has maintained in her the emotional maturity of a child even though she's eighteen. She hasn't had the chance to learn to deal with the terrifying cocktail of emotions that being a person—on the run—in the city—can engender in one, so she's high-strung and prone to panic.

She learned most of her mannerisms from the head of the laboratory project under which she was locked up as a specimen, speaking little, slowly, and rarely of emotion or fantasy. Her behaviour strikes some as socially unorthodox, which is really only the case because she doesn't know what orthodoxy would look like. She doesn't always know how to cope when things get too much, expressing her feelings in intense outbursts.

Because books were her closest companions throughout her youth, she is a huge bookworm, with immeasurable knowledge catalogued in her mind; for one so naive to the ways of the world, she certainly knows a lot about it, particularly in the realms of science and history. Having lots of general knowledge of many things and lacking cultural context to those same things can lead to funny turns in the conversation.

At seven, Adelaide learned she could read the cells of living organisms. Later that became a finer intuition for their genetic content, and eventually she attempted to change the genome of a caterpillar she was keeping in a jar. The butterfly emerged with eight wings. Her parents, paranoid and influenced by the ongoing genetic modification scare, called in authorities to investigate the problem; on asking Adelaide to demonstrate what she did to the caterpillar, she produced the incriminating evidence.

To mitigate the extreme risk that they believed she posed, state authorities incarcerated Adelaide at the Midtown Laboratory, where she spent the next eleven years of her life, eating food delivered through a door flap, receiving regular health checks, and being involved in experiments where her abilities would come in useful. She lacked interpersonal contact throughout that time, and was not allowed to own anything containing organic material, except for books, which were printed on special pulp.