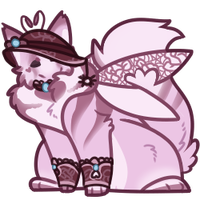 With a pastel goth plant witch aesthetic and a personality that embodies "do no harm but take no shit", Zora often comes across as quite intimidating. It took her long while to figure out what kind of person she wanted to be, but once she came into her own she quickly grew into a confident and cool demeanor. It can be hard for Zora to soften her blunt edges around others, but when she loves she does so fiercely, and is incredibly loyal to those she cares about. She's slow to anger but will hold grudges for an eternity, and sometimes has difficulty seeing the forest for the trees, so to speak.

Zora finds music a great way to express herself. She's nearly constantly listening to something, and has dozens and dozens of curated playlists to suit whatever mood or situation she finds herself in. When she first started dating Matte she found it incredibly easy to connect with Gloss for this reason, and slotted easily into place with the rap trio. Zora is also dating Q, though their relationship is one that's based more on a deep affection and caring for one another. They'll always look out for and be there for one another, but it's a love that isn't quite romantic.