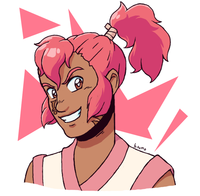 No character sheet yet—check back later!

Liss is strong and fierce, with a bit of a god complex. She believes she could remodel the world in her vision, and only has to learn how and invest effort in it. There is no higher power, the only compelling force in the universe is the will to do what it takes to get what you want. Her powers of mass-energy conversion have only lent credence to her certainty that the universe itself should bend to her design: with perhaps the most devastating powers in the story, she can essentially turn everyday objects into nuclear bombs, levelling buildings on a whim.

Having suffered through the capture and occupation of her hometown of Henkor by the Orsandin, Liss is strongly motivated by hatred for imperialism and conquerors, and has pledged to rid her homeland of Orsandin people. Determined, cold, and sometimes callous, she has a hardline moral stance, and only affords those she sees as victims the dignity of humans.

She has a firm memory for the deeds and intentions of people, and will remember kindness—and wrongdoing—long after all others have forgotten. She is vindictive, unwilling to forgive, and disdainful of the idea that people could change by their own volition.

Despite her abilities being rather explosive in nature, she is a patient, forward-thinking schemer, adept at playing the long game. She does not carry herself like a superhuman individual: rather, she believes that it is the deeds of the individual, not identity, that set the great apart from the ordinary.

Born on the island of Henkor where the laborious art of spell-folding is the cornerstone of combat, Liss' ability to explode objects without a sash quickly made her the most competent fighter there, and the subject of more fear than admiration.

When she was twelve, her island was captured and occupied by Orsandin soldiers, her people goaded into perfect deference to Orsand and its emperor. She kept her rebellious intent hidden for years, and eventually sprang her plan three years into the occupation, fleeing Henkor together with her best friend Noma.