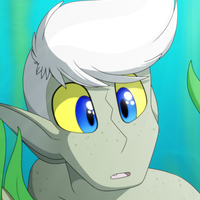 A very playful shark mermaid. She values fun over safety, and this often gets her into trouble

Very playful. She loves playing! Any game is fine with her. Her love for games often gets her in trouble, because she'll pick games over safety. She also really likes shiny objects, and will come on land willingly in order to get them. This playful nature changes if she smells blood. Delta will go full blown predator mode at the scent of it, even if it's someone she knows. She hates when this happens, and will typically be in a bad mood for a few days afterwards.

Delta can breathe in salt water, fresh water, or air

She can also produce a chemical that's irritating to the eyes, and can squirt that at people. It’s pretty much harmless, and it’s only really used as a last resort

Delta’s origins are unknown. Water is a rare thing in her world, and the majority of aquatic creatures die off due to lack of food. She’s lucky to even be alive at all!

Still, aquatic creatures are usually very valuable. Sentient water creatures are held with high regards! Delta’s genetics may not be as “pure” as other Oomays, but once she was found she was immediately adopted into high society.

Growing up, Delta hated the fact that people only liked her because she was “expensive”. None of her friends were real. Plus, she never really understood the whole stuck up rich person facade. The people around her didn’t seem happy. They just wanted to show off. Despite hating her situation, Delta still loved going to new places and meeting new people. Her curiosity usually got the best of her.

One night someone broke in. The intruder looked small. Much smaller than Delta. They had glowing eyes and a shiny metallic body. So shiny… Delta had never seen anything like it before! She couldn’t help but stare… Staring maybe wasn’t the best idea. The intruder saw her staring, and started to get defensive. When they realised Delta couldn’t get out of the water to attack, the intruder decided to ask some questions.

They mostly asked about where valuables were being hidden, and what security was like here. Delta had no clue. She was stuck in one place all day, it’s not like she could get out and explore the area.

Then the intruder asked about mirrors. Mirrors are very rare and valuable, maybe even more than water! While Delta didn’t know why, she knew she’d seen some around. Because they’re so valuable, the snobby rich people loved admiring themselves in them. The intruder demanded to know who had them!

She was going to just tell them, but then Delta realized that SHE was the only one who knew where any mirrors were. She could have fun with this! Why not? Delta told the intruder that she’d say who had the mirrors, if they would play a game with her for a bit. The intruder reluctantly accepted. They seemed rather annoyed, but they really wanted these mirrors.

The two played for a bit. Eventually the intruder got fed up with it, and demanded to know who had the mirrors again. Delta was about to tell, but then someone else walked in. It was a guard! But this wasn’t just a regular guard, this was a demon hunter. They had their crossbow aimed directly at the intruder. The intruder seemed stunned. They tried to explain what was going on, but the guard wasn’t having any of it. He fired the crossbow at them. The arrow missed the intruder, and went right through Delta’s tank!

Delta’s tank was made up of two sections. There was a glass area, where she could come to the surface and talk, or be looked at while underwater, and there was a back dam-like area that was connected to an outside source of water. The dam lead to a man made pond of sorts, that was connected to a larger body of water via pipe so water could be pumped into the pond.

The arrow went through both the glass, and the dam. The wooden dam apparently wasn’t very stable, because it immediately fell apart once hit. It collapsed, and everything in the tank was drained into the pond, including Delta!

Delta was a bit dazed, but she wasn’t hurt. She hadn’t been in any open water since she was a baby. This was amazing! There was so much room to swim around! Why was she never allowed in here?

Then she saw it. The drain pipe. It looked interesting, and Delta’s curiosity ended up getting the best of her. She decided to swim through it. Why not? She was sick of all these people anyways. Now it’s time for an adventure! The pipe lead her to a larger lake area. It took awhile to get there, so she assumed that this lake was pretty far away.

The first thing Delta did at the lake was explore. So much new and interesting stuff to investigate! There were small water plants growing in sandy soil. The sand was fun to play with, but it got everywhere and made the water murky and hard to breathe.

Delta decided to make this lake her home. While it wasn't huge, it was big enough to keep her hidden when anyone came looking for her. It was also fairly out of the way, so people didn't come by often. She made herself a little house out of a fallen tree and a small underwater cave. She dug out the bottom of the cave to make it bigger.

Delta may be a bit secluded, but she enjoys living in her own private lake. She's taken it upon herself to guard her lake as well.

Clothing: Sporty swimwear. She doesn’t have legs, so no pants, but she may wear a skirt/dress on occasion

Physical appearance: Muscular and fit, maybe a bit manly. Her arms are big and beefy, with huge hands. Her nose is really flat and fish-like. She doesn’t have boobs because she isn’t a mammal

I first Saw Delta in a dream. That's where everything about her came from. Design, personality, backstory. The only thing not from the dream was her name.