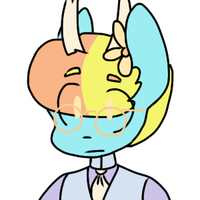 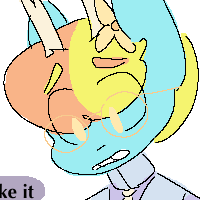 As one of the Coalition of Reality's Overseers, the leaders unto which all Fragments look for guidance, a lot rests on Profound's shoulders. He assists in managing the Research & Remove division, possibly the most dangerous and violent COR division, which sends out members to steal rare artifacts from Timelines to prevent disasters or massive-scale destruction. One wouldn't be able to tell by looking at Profound, though - quiet, nerdy, and often spaced out, he's the last person anyone would expect is highly adept at combat and strategy.

This skill is what prompted the Overseers to invite (via vote) Profound into their circle, finding his knowledge and application useful for when times go awry. He spent much of his time initially advising Archise on how to fight the Shards and directing groups of Fragments recovering dangerous artifacts.

Much to people's surprise, though, Profound himself no longer fights. He'll help others, direct them, and even oversee battles if he needs to, but refuses to raise a sword or magic any longer. After all, he took a pacifist vow after the whole... T-1 Continuum incident.

Profound considers his biggest lapse of judgement to be directly involving himself in the T-1 and T-2 Timelines. At the time, it hadn't sounded like the worst idea - T-1 Continuum had managed to harness Fragment magic to make some sort of superweapon, and was using it to force most of Universe Core to submit to his rule. And, well, c'mon - it was a Continuum; everyone knows that the only way to wrestle him into submission is brute force. So it made sense to call in one of the strongest Fragments to yoink that superweapon right out of his hands.

It went poorly. Exceptionally poorly. Profound doesn't talk about it with anyone, but everyone knows that he lost to T-1 Continuum and was temporarily fused with the superweapon until a few Frags invoked Pyatiugolnik. Profound wasn't trapped for long, but Pya's solution to the entire incident was to remove all Fragments from T-1 and -2, and then explode the two Timelines.

Profound took an extended vacation afterwards, and although he eventually returned to his Overseer position, was much more distant and detached than before. He only seems to talk to Farley in a friendly matter anymore, and some of the other Overseers even marvel at his level of separated from everyone else - and what exactly about his time in the weapon or under Pya's influence caused such a thing.

Profound makes a point to avoid the hell out of Peanut Butter, who is presumed to be the Fragment that comprised the original T-1 superweapon. PB has no memory of this, or of the T-1 & -2 Timelines, but the mere association is enough to spark Profound into ignoring him. PB has to go through Jelly if he needs anything from his boss.

As a cherry on top, Profound is very very upset about the T-22 incident, and almost violently rejects Happy every time the other comes within a certain distance of him. Just please leave him alone.

Talking with Jubilee, one of his best friends, has helped, though. Joobs' constant love, care, and support has made it easier for Profound to find a reason to forgive himself, especially after everything that happened. He's mostly found these days following Jubilee around, listening quietly while the other directs his own division of Fragments.

As a Fragment, Profound can control his appearance. He likes to keep two light yellow antlers, two-toned hair, and a long, thin tail, however. Sometimes he threads more flowers into his hair if he's feeling especially calm or happy, but that's rare nowadays.

He typically wears a vest overtop of a high-collared dress shirt and tie, all in similar pastel purple hues. The tie is the color of his eyes, as are the cuffs on his sleeves. He never changes out of this outfit, even when relaxing - he just finds it cumbersome to change clothes.

Profound is usually found staring blankly into space, eyes a bit glazed over. He has mild attention problems, and struggles to focus on things, especially if people are pressuring him to.

He can be drawn romantically with Jubilee and on friendly terms with Farley. 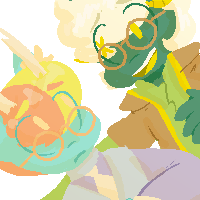 • Favorite color is light yellow
• Favorite season is Spring, for the flowers
• Favorite memory is meeting Farley
• Doesn't eat, but doesn't hate the concept
• Strongest sense is touch
• Strongest taste is sweet
• Ambidextrous
• Is ticklish in the back of knees
• Enjoys meditation when he gets stressed out
• Dislikes most Continuums after the T-1 incident, and refuses to do missions that involve any Conti
• On the other hand, tends to pity Nonstops for "dealing with" Conti in almost every Timeline
• People rumor that he was blessed by Pya, but there's no solid evidence for that (yet?)
• Likes the hugs that Jubilee gives
• Has a beautiful singing voice (tenor), but doesn't like singing in front of people
• Chews on shirt collar when especially stressed or provoked into violence