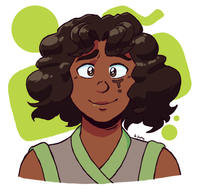 Contrary to the spirit of the people of Henkor, Noma dislikes entering the sea, and shuns adventure. As child of a clan of coal ("black rock") miners residing in a village on the volcano's slopes, she was taught a rather different set of values from the children of the port—namely, caution and thoroughness were always emphasised. For this reason she never mingled well with others of her age—that, and the relative geographical distance.

A childhood of playing second fiddle to the ambitious and illustrious Liss c onvinced her that she was better suited to staying in the shadows. Even now, she avoids positions of visibility: better to perform her role well than to be known by all.

Indeed, responsibility is her greatest virtue. She is conscientious and understated, making up for her comparative lack of innate talent with studiousness and hard work. Those who know her, Liss most of all, know she is reliable and loyal, as terrified as she is of the unknown.

Born to the Nekala family from the mining village up on the Henkor volcano, Noma spent her early childhood isolated from the rest of the children of Henkor. She later befriended Liss, who soon became the catalyst for most of the significant events of her life.

At twelve years of age, cruel Orsandin conquerors captured and occupied the archipelago of which Henkor was a part. At fourteen Noma was conscripted by the Orsand military and then assigned to the vocation of physicianship, learning about first aid and the application of medicines.

A year later, Liss sprang a plan that opened the doorway to escape. She asked Noma to join her in her flight, an offer she was both eager and terrified to take.