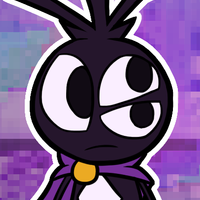 NOTE: I'm ok with people shipping him with other Patapon characters & ocs! As long as he's in character it's fine!

A PSP SD card was corrupted, causing the data inside to become an unreadable card in the human/real world, and a void of random data (with a few, small islands of readable info here and there) in the digital world. However, the void has an ability to create new “beings,” at random based of what was previously on the card. Errorface is one of them.

He’s aware he’s not supposed to be in any part of the Patapon series, and was created in a way unatural/untrue to the games’ logic and lore. Because of this he’s constantly confused and unhappy with himself, his existence, and his state of life.

Errorface managed to find a very small chunk of land in the void to live on, and spends a lot of time collecting random parts to hoard/build a living space with. It’s therapeutic for him and helps him take his mind off his problems.

He knows a few other characters who survived the card being corrupted, but gets very anxious and insecure about himself when he interacts with them. He’s also not the kind-of person (patapon? character?) to approach someone first, so if someone wants to talk to him they’d have to make the first move.

-He exists in a Wreck-it-Ralph style Au (game characters exist as their own being, etc.)