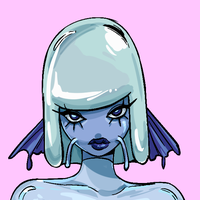 [Unnamed 39] was on of many contracted with the expedition as what would be a dock worker - for an embassy and trade hub that was never to be built.

As it is, she opted not to be put into chemical hibernation with several others after the short jump drive misalignment incident - and while remaining on call, doesn't officially have a lot to do day to day.

Which means she's on gofer duty every so often, and has a pretty good mental inventory of everything on the ship.

Which isn't to say shes seen much of anywhere outside Pu██naji's shop. The two have something of a partnership and rivalry going with design - even if [39] doesn't have all the skills to pull off her own vision.

[39] got a job on a trade route before she was fully grown- she hid the darker colors that resulted in for a while. This is not seen as a problem on Iu'husid - so long as you aren't natural-born. The other planets, Calcaei and Weltra, have laws against this.

[39] was  part of an industrial accident on her last tour, where she lost some mass. It's part of why she was ready to sign up for a less stressful military/government extended contract. It's also why she goes with a helmet instead of mimicking hair like almost all the rest of her crewmates do... even if it's a stylish one. She copeing via actual protection,  not by being a water slut.