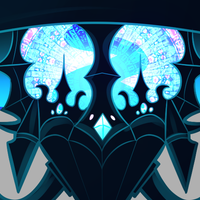 One of the many forms Darkness takes so he may guide souls.
The darkest of daddies.

"A world without chaos is nothing more than chaos itself."

Long ago Darkness, along with the other elements, watched over the life that roamed the lands they had made. This "life", however, was robotic; humans all felt no emotion, moving the same way, all at the same time, doing the same thing. Even the animals followed suit. There was no discourse, no individuality. This was not how life was meant to be used, this was repetition.
Darkness argued it with the other elements, begging them to change things, always getting turned down.
"What good would it be to teach them the emotions we have?"
"What if they turn on us?"
"Could you really go on with them hating you?"
So that was it. They were aware of this glaring problem yet didn't want to interfere for fear of being hated, just as some elements hated others. Darkness wanted to laugh at such a petty problem. Fine. If they were too scared of the backlash, then he would shoulder it all- He would become the enemy.
He released seven emotions across the lands, these emotions multiplying and spreading, creating different feelings with every soul they infected.
Life now had feeling, but he needed to push it further. He needed something to counter the very concept of life itself.
Death.
He spread parts of himself throughout the world and gave them souls, creating creatures whose job would be to spread death and give everyone the fear of mortality. He would come to be hated and feared for the rest of eternity, but it was price he was willing to pay to push life to its fullest extent.

In order to make sure his shadows don't get too out of line, Darkness took human(oid) form and roams the land with them, either stopping creatures himself or preparing a hero worthy of shining new light on the land.

Notes: I remember wondering why darkness always had to be related to the villain and light with the hero, so I slowly formed this guy! He's the embodiment of darkness itself, yet he's always there to help protagonists when they need it. But he's also not exactly the kindest, most supportive character, as sometimes he'll help demons and antagonists. He was, more or less, a get out of jail free card for me, there to help with his godly powers whenever my other characters were in predicaments I couldn't find a solution for.
I had been considering bringing him in when I saw this design, and I thought it'd be perfect! A lamp shrouded in darkness- the guiding light!

Personality: Lan is elegant and mysterious. He always seems to show up at your darkest hour as a guiding light, usually to offer you vague advice over what to do next. He knows a lot, more than you know about yourself. He never stays for too long, always leaving once he's assured you're on the right track, though he does visit occasionally. He can be described as proud and fatherly towards all the souls around him, considering them as his children than anything else. Even those that have gotten drunk on his darkness he'll still be proud of, albeit slightly disappointed.

Non-Human Abilities:
- Darkness - Being the embodiment of the element itself, he can freely control it. He tends to solidify the shadows into spikes that shoot out of the ground at rapid speeds, although that is the only attack anyone has ever seen him use. He also tends to use his powers to form shields around people (they can range in height and width but can very much be broken).
- Shadows - Wherever there is darkness and shadows, Lan can see/hear through. He often uses this to observe the life, judging when to step in or not. He can only move and/or teleport where there are shadows and darkness.

Drawing Details: He always has a dark blue suit, whether it's formal casual or formal, and his lamp head is an absolute MUST- it must also match the reference image.

- Every few centuries Lan will change everything about himself - his voice, his appearance, his name - to what he feels is best for the current time. There are times when he's even been a woman.

- The jewels around the center of the lamp show all the souls in general. If one ball begins to change color from the usual vibrant blue, then Lan will know something is wrong and will go to the source immediately.

- He is capable of eating and drinking, though he'll only eat when you're not looking. But he'll drink if you still watch, he just needs a straw. You can't see where his mouth is, but you'll hear the slurp and see the drink get smaller.

- Can change his lamp head to an actual human head should he feel it would be easier to communicate with someone. And so he can wear hats.

- Loves drinking from 64 oz. mugs no matter the drink.

- He holds no attraction to anyone as he thinks of everyone as his child.

- When speaking to him, everyone that listens to him will hear his voice in the language they best understand.

- There is no way to summon him. He will always be the one to approach you.

- The air will always get colder when he's approaching.

- One of his earliest names was Khaso, which was misinterpreted over the years of history being passed down orally, changing his name to Khaos, which in turn leads to the current word Chaos.

- Because he is considered evil to many, there have been times when he personally has been hunted. There was an occasion where one very nearly defeated him, and should Lan ever have a human face, regardless of how it looks, there will be a large scar over his right cheek.