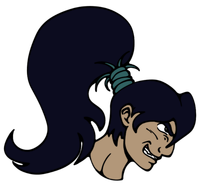 Anise is adaptable, hardy, daring, honest, independent and practical, but also solitary, stubborn, arrogant, blunt, impatient and just plain selfish. She has really hard time caring about anyone else than herself and her own agendas, and to make her respect someone else's opinion one pretty much has to be stronger than her and beat her into submission - or bribe her with something. She isn't really cruel and doesn't get enjoyment from bullying others for the sake of it, but she is ridiculously vengeful and can go to great lengths if she feels like someone deserves a payback. Her social skills are severely lacking, but she enjoys being alone more than in company anyway, so she mostly doesn't care what other people think about her. What she does crave though is respect, and like nearly every other member of Saiyan race before Anise, her preferred method of gathering respect is by getting physically as strong as possible.

Anise is very much an average Saiyan by her looks: she has blueish black coarse hair, dark brown prehensile tail, black eyes and somewhat tan skin. She's about 170 cm tall, but might appear a bit shorter thanks to her muscular body that makes her frame look more stocky than lean. Her hair is usually kept in ponytail and her clothes are more practical than anything else.

Anise was a so called "infiltration baby", meaning she was sent as a toddler to a faraway planet to grow there and eventually take control of the planet's weaker native races. This was a common Saiyan practice and after completing her mission she was planned to be fetched back home, but long before that was supposed to happen planet Vegeta was destroyed and the whole Saiyan race was nearly wiped out. There was no one coming to get her - and her mission on an unknown planet went almost as smoothly.

After landing to her target planet Anise was taken into laboratory, as she was after all a real, living alien. The natives of the planet tried to examine her, but the grumpy kid was more than capable of making sure no harm was done to her, as she was already far more powerful than the docile natives. As she grew she quickly became plain impossible to control, but the natives were still unwilling to try to kill her, as she was their first and only contact to other beings of the vast space. So, as a last measure to win time to come up with a plan on how to handle her, Anise was drugged and sent to one of the planet's inhabitable yet harsh and desolated moons in a primitive shuttle. There she could wreak havoc as much as she wanted without harming any sentient beings.

And on that moon Anise spent the next few decades of her life. Every once in a while the inhabitants of the nearby planet would send some supplies for her, but she didn't really have use for most of them. The moon already had oxygen, water, plants and some animals, so the resourceful kid learned soon enough how to survive on her own. She spent most of her time either by trying to survive the extreme weather of the moon or punching creatures to either kill them for food or, in a true Saiyan fashion, just for her own amusement. On rare occasions she did dabble with the things sent to her from the main planet, and videos and picture books did teach her some basic things about life outside her own moon.

Then finally another humanoid came to the moon! It was a Namekian named Kal, who was just making a pit stop to fill his space ship's water tanks while traveling from New Namek to Earth to meet his old friend Dende. The Namekian was shocked to find out how Anise was abandoned to the moon on her own, so he took the Saiyan with him to Earth, thinking one more Saiyan couldn't likely cause any more damage to the planet than it had already suffered through. Earth was full of new experiences for Anise: millions of people, other surviving Saiyans, culture and manners to frown at! Especially getting the woman to wear proper clothes was a true battle, and still even after a few years of civilized life hardly a day goes by without her offending someone with her lack of common sense. Currently she is training hard after seeing how ridiculously strong the Saiyans of Earth are as well as trying to steal Dragon Radar from Capsule Corp. to either wish for a mountain of ice cream or New Planet Vegeta; she hasn't decided yet for sure.