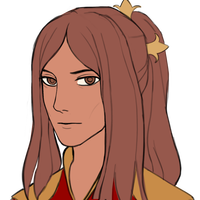 No character sheet yet!

Amaranthia was a prim, fussy but loving woman who held the welfare of the people in her life close to her heart, but bereavement has robbed her of much of her will to live. She is almost a shambling husk of her old self, and nothing seems worth living for except her daughter Freesia, whose upbringing she finds herself devoting all her energy to these days.

She left her home in Licur readily when she was given the chance, for her life there had become a constant reminder of her husband and her joy before. Her personality is a washed-out version of what it once was: where she had once delighted in the sights of nature, she now watches the birds listlessly, merely mildly interested.

She no longer grooms herself quite as meticulously as she used to, though she tries out of a sense of necessity rather than pride in herself. She does the chores in her new home religiously, turning to clockwork routine to feel a sense of purpose.

Walking through the forest grove near her home restores her mood sometimes: the way the trees tangle, ungoverned, as they never could grow in her homeland, and Freesia is the only bright light in her life now full of shadows. But each morning she wakes up and she must start over.

Amaranthia, also named Talurn, lived in the village of Licur of the Tysian tribe together with her twin brother Dorian. At the age of eighteen she met her future husband, Caric of the Tana village, while harvesting urana one evening, and they quickly grew enchanted with each other.

Talurn considered the day she married Caric to be the happiest day of her life. Although marital unions were not expected to last long—children born of the tribe become children of the mother's village, where all adults share in the role of nurturing them—Talurn was lucky to have child with a man she loved. In fulfillment of their mutual wishes, their union lasted far longer than any of their companions'. They lived productively, caring for the children of the village and paying especial attention to their biological child Uri (Freesia).

One evening seven years into their marriage, Caric left for his guard shift on the mountain pass between their village and the Queen's Road as he always did. He failed to return home. Two days later he was found dead near the pass. Talurn refused to so much as hear the cause of his death, only daring to look upon his face again when his corpse had been dressed for the funeral.

From then all things—the huts they had built together, the children they had raised, the meals they had cooked—became reminders of the abyssal hollow he had left behind in her life. When her brother was approached to be bought by the Duchess of Diamonds, it was as an act of mercy that he bargained for Talurn and Uri to come with him.