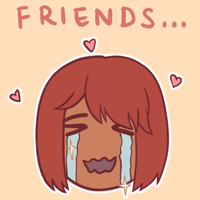 Freesia is, as most six-year-olds are, inquisitive about the tangible world around her. In particular, moving to the First World and having lived here for two years has given her a wealth of new sensory experiences to take in and wrap her mind around.

She has a vague comprehension of the abstract ideas of departure and loss, having lost her father, and then her old home and all the people she once knew. Her mother, Amaranthia, has done her best to raise her well in spite of these drastic changes in her life. These circumstances have made her rather anxious for her age and attached to her mother.

Freesia was born with the name Uri in Licur, Tyse, to the happily married Talurn (Amaranthia) and Caric. She was raised by all the adults in the village, as was traditional, although her parents and her uncle, Dorian, devoted more time to her than anyone else.

She was barely three when her father died brutally, although this detail was kept from her. Her mother's grief in the wake of this event was keen and all-consuming, to the extent that remaining in the village became torturous for her.

Eventually, Dorian was bought over by the Duchess of Diamonds from the neighbouring world, and during the conversations preceding it, he asked that his twin sister and Uri be allowed to come along with him. Orobelle—a child herself—was eventually convinced.

Now she lives with her mother in the Diamond Duchy while her uncle works for the sustenance of all three. Dorian has taken them to the palace on countless occasions, familiarising her with the place and the people in it. In spite of all of Orobelle's efforts to distance herself, she has come to view Freesia fondly.