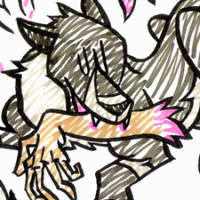 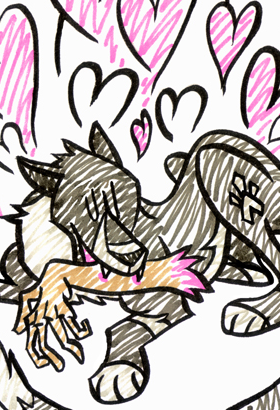 This gal here was my fursona. I created her when I was 13, and haven't used her in years, but she's a fun character and I still think of doing a minicomic about her (maybe with a redesign) someday.

Chanda is a maneater-- literally. She is a black Indian leopard with a torn off left human arm named Limby for a best friend.

She constantly boasts about all her hundreds of kills and how fearsome she is, but she might just be making all that up. Do you want to try her and find out? She's always chewing on bones or skulls and carrying Limby around, and she has a paw print marking on her ass, because I was 13 at the time. Besides being egotistical, she is grandiose, hotheaded, and also very dumb, and funny in a way that she doesn't intend. She's foolhardy, clumsy, and undignified, but she doesn't think she is, and she would be enraged if she had any thought you weren't taking her seriously. It's easy to get her to fall for anything, but she manages self-preservation because she lives in her own paranoid fantasy world where everyone and everything (including, and especially, harmless inanimate objects) is out to get her. She's fierce and wild and awful, but it's hard to be really afraid of her.