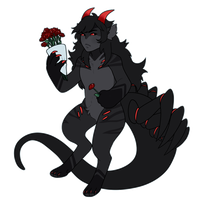 Everything about Asmodai's thoughts, actions, and tendencies scream average... The biggest problem is his grouchy, 'don't-touch-me' appearance and his species' oft-considered unlucky trait of having venom spit.
With luck seemingly stacked against this fine young man, Asmo thinks nothing of it-- he's himself, and only himself, after all, and that'll never change. Every day is treated with the excitement it brings him. But that's another point... "Life is so dull without the... Caress! Caress of another-- that sounds real romantic, doesn't it?"

He started working at a flowershop to meet cuties and find his future spouse. Then he was quickly brought down to reality by noticing everyone that buys flower arrangements is already in a relationship, or just died or something. It was a real buzzkill but by the time he figured it all out, he was kind of in deep.
Now days go by while what little single people he meets turn him down for one reason or another...

Asmodai himself is very picky and judgmental, seeing nothing wrong with himself in comparison to others at times. What can be a quick question from someone turns into a full-on lecture around Asmo, who seems to know everything and anything (despite not really being the case, but simply the Venos talking with such passion that he feels he's right). It is common for him to think a single criticism or passing thought from another could possibly be an attack on his personage or his species, and he's quick to turn on the waterworks, which are truly done with passion in his heart, but extremely misguided and disconcerting to others.
With such a small understanding of the world around him, much less his own little scope of reality, it's no wonder those that give this Venos a chance are tempted to call things quits. And yet... Most days, he wistfully wonders why his life isn't just perfect, with that special someone, out there. He thinks of them! He longs for them! Where are they...?!

He certainly has a one-track mind...