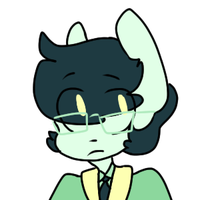 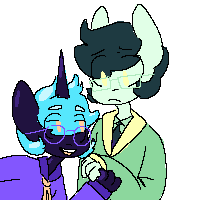 Considered the godfather of Leptos' entire identity and structure, Osteoblast is the hands-down most famous person on Leptos, second only to the patron god, Marburg. Statues of Osteo are scattered in the major cities (minus the Beaut Hive), streets are named after him, children are given his name in hopes that they will follow in his footsteps, and there's a federal Lepton holiday on his birthday. The level of adoration almost seems absurd for someone who "only sequenced the unicorn genome", but that sequencing led to the rejuvenation of the Lepton economy after the mines in the west dried up, and gave the dimension a whole new outlook on life. It's only natural they'd come to idolize and sterilize the man who brought genetic engineering to their doorstep.

Still, it's not like Osteo has let his fame go to his head. He's notoriously down-to-earth, and most people who meet him don't even know they're talking to a celebrity til long after the conversation is over. He laughs easily and for uncomfortably long periods of time, has a bit of a nasally tone, and seems more interested in learning about whoever's talking to him rather than his own past. It's hard to upset the guy or offend him - he's been around for so damn long that he's not quite sure how old he is, and has long since moved past caring about petty drama or minor annoyances.

Osteoblast has had quite the ups-and-downs because of this. He was born like any other Lepton child, and graduated high school with high marks. He assembled a small team dedicated to genetics, and together, they sat down with dozens of samples of DNA and phenotypes in order to piece together what was the unicorn genome. Upon publishing their work, Osteo was then killed by a rival research group, who stabbed him through the skull with a large knife.

Unfortunately, this had the opposite effect from intended. Rather than destroy Osteo's work to take credit for his teams' discovery, the news hit major headlines and everyone caught wind of the scientist who had been martyred for his research. Osteo became a major talking point, and discussions cropped up all over Eucaritia over what to do about him and his killer. The talk lead to Osteo's ghost being exceptionally powerful and tangible, and he was able to actually interact with some Lepton citizens and give his testimony in court.

His death inspired a new wave of genetic engineers to flock to Leptos, eager to follow in their newfound idol's footsteps. And lo, the dedication to genetic engineering that modern-day Leptos is famous for was born, all thanks to Osteo being killed over his work.

Eventually he was visited by Marburg, who created him a new body (that was identical to his old one) and necromanced his ghost into it. He then ascended Osteo to Saint status, and let the poor man be. Being alive again, however, was welcome after living as a semi-tangible ghost for at least several thousand years. Osteo moved into a government-funded apartment in Closvia, and while he allows visitors, is generally pretty private. Most of the Lepton mayors, politicians, and geneticists visit him, either to have the legendary man just touch them, or seek advice.

As a Dullahan, Osteoblast can remove his head at will and summon small shapes (yellow stars) to control other things, including his disembodied body. More information about his race's capabilities are here.

He wears a light green suit, a lighter green undersuit, yellow trim, and a dark green tie. Osteo doesn't find a need to change out of his outfit often - he no longer produces any fluids that would make it smell or anything - but will occasionally dress up nicer for political meetings or certain ceremonies. He prefers his iconic attire, however.

Osteo is usually smiling and/or laughing. He's easy to get along with and is more than happy to settle conflicts with anyone. He can be drawn alongside any Lepton residents. 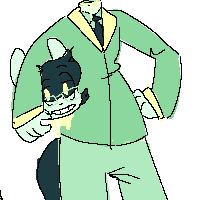 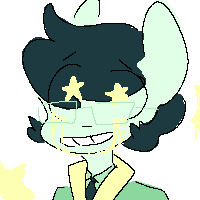 • Favorite color is burgundy
• Favorite season is Winter (bundling up by a fireplace is fun!)
• Favorite memory is meeting Marburg
• Favorite foods are rock candies
• Strongest sense is hearing
• Strongest taste is sour
• Ambidextrous (taught)
• Is ticklish in the back of knees
• Gets a lot of love letters in his inbox, takes time to type out a gentle rejection to each of them
• Is very aware of how jealous Methano is of him, doesn't care
• Feels incredibly bad for the rest of his research team, who were completely overshadowed by his achievements
• Often uses slang/euphemisms very wrong
• Some people (a small cult) believe his very touch to be a holy blessing
• Anything signed by him will go for at least 50,000equans at auction - he tries to curb this by signing a lot of things for free, but it doesn't help
• Isn't nearly as famous outside of Leptos, but people will vaguely know of him as  "that important Leptos person"