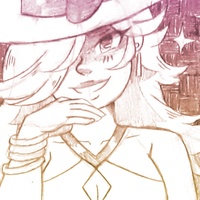 the witch of ephemera. a mysterious collector of illusionary baubles and ethereal treasures. very smiley. is a little shit-stirrer. comes off as creepy and offputting. stays in a house in a creepy forest that doubles as her shop. roommates with astrid