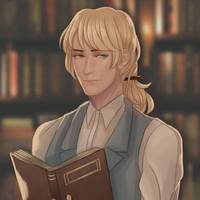 A track that I composed about Aleigh (and also the penultimate chapter of Eagles and Swans).

In Astra, being a noble means never being allowed to be ordinary. Aleigh has lived a life in which the twin forces of wealth and authoritarian control have shaped him into a person both haughty and repressed. Even though he always seeks to be fair, just and merciful by principle, he is held back by a limited understanding of the struggles of those who had any less fortune than he.

His upbringing was a minefield of emotional abuse never anticipated: a youth framed by parental absence and emotional manipulation from his brother, the King, have not only made him deeply anxious about the intentions of others, but also warped his understanding of familial love, and left him inconsolably lonely. Through his childhood, he learned to repress himself to survive, revealing his innermost feelings only to those he most trusted.

Holding a coveted social position as the Arcane Prince, he's had his fair share of sycophantic false friends. Now he keeps to himself, paranoid that no one would simply befriend him for who he is, instead doing so for their own gain. At the Central Circle School, where the highborn are normally beloved by all, he pushes attention away through acerbity and deliberate avoidance of company.

Instead, he turns to books for company: he is an avid reader attuned to the nuance and artistry of novels. Most never find out that Aleigh is capable of unprecedentedly deep loyalty and affection, which he extends exclusively unto those who manage to bypass his icy defences.

Astra has two heads of state—the Arcane and Ordinary Diarchs. The Arcane Diarch is elected from among the eight noble families of Astra, one of which Aleigh happened to be born of—the Luzernos. The Luzernos were involved in the merchantry business, and his father Coro was constantly away from home, managing his burgeoning businesses. Because both he and his older brother Aligon were eligible to be elected to the Arcane throne, both of them were trained throughout their childhoods to hold the bearing of kings.

Shrewd and machiavellian, Aligon found his calling as a politician early, and not long after he was elected to the seat of Arcane King at the young age of twenty-nine. The Luzernos became the Arcane royal family for that term, and Aleigh came to be the Arcane Prince.

With his brother's ascension came a shift in the family's power dynamics: Aligon grew into his role quickly and began to take on the role of head of the Luzerno household. Anxious to remain in possession of his throne, and aware that the presentation and bearing of not only himself but also his entire family were essential to succeeding as a politician in Astra, Aligon began to dictate almost every aspect of Aleigh's life, making garment choices on his behalf and requiring him to submit all his timetables and activities for vetting.

This excess of external control in his life shaped him irreversibly, as did his newfound visibility as the Arcane Prince and the presumptive heir to the Arcane throne.