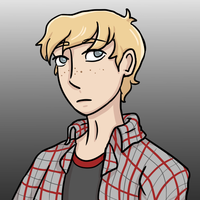 this is his personality. take it

The only child of a single Italian mother, Dante was born and raised in Sydney, Australia, and has always loved history and photography. He was going to go to university to become a history teacher, until an untimely car crash led to him dying young.

Finding himself stuck in the afterlife, but not sorted to a heaven or hell, he decided to stay and help run the afterlife network (aka: run errands) after the system supposedly glitched and gave him ghost status, which is where he met Minda. He's since joined her on her adventures, and they've become inseparable.

Just friends. Definitely just friends. Dante's definitely not thought about asking her to be something more. Not at all. Never. Why would you even suggest such a th

Dante thinks they're friends. It can be hard to tell.