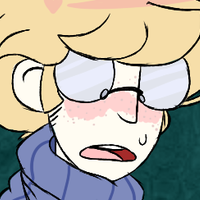 Seamus is a very shy and nervous man! He lives higher up in the mountains in a rather snowy area! Seamus works as a mailman, and usually takes his dog named Bark on his runs. She's a saint Bernard, and pretty much a gentle giant! When Seamus isn't delivering mail or at the park, he can be found doodling at his home! He loves drawing animals though he claims he isn't too good at it. Bark is pretty much his favorite subject to draw! He has stacks of portraits he made of her.