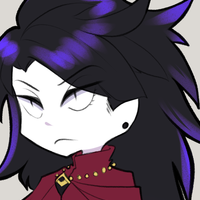 Weapon(s): A heavily modified revolver named Heavens Gun. Aside from his revolver, his prosthetic arm is used as a power gauntlet, giving him inhuman strength. Because Swing Coat modified his DNA at some point, he's able to both heal and damage via Soul Threads enhanced by his prosthetic arm. The prosthesis is an amplifier for his magic, being proficient in Arcane sorcery (despite his alignment) and Pyromancy.

Vitta tries to pass himself off as some mysterious vigilante character. He's quiet, reserved, and a little rough around the edges when it comes to socializing with others. If he's asked the right questions, though, his facade quickly cracks under the pressure. Under a cold exterior is a clumsy and shy man who enjoys mundane things in comparison to what he does. He loves partaking in activities like gardening or cooking or even looking after his small chicken coop as it's the only semblance of normalcy he'll get. Of course, his most preferred pastime is doing any of these with his husband or even hanging around his husband's auto/airplane repair shop. There is a side that many aren't privy to or more that it's for the best.

For one thing, he makes it apparent that he has suicidal tendencies. His speech is peppered with self-deprecation and overall nonchalant about anything that befalls him. Things like life-threatening injuries are passed off as minor inconveniences considering the fact that he can't actually die. This makes it difficult to have some regards to himself and his body. It's worrisome but he's adamant about his outlook.

He's also been known to hold one helluvah grudge. Depending on the severity of how he was wronged, he will contemplate murder as justice. Even after he's gotten his revenge, those that survive will never be let down from their mistakes. It's hard for him to accept even a bit of reform or change of character. It's harsh and something he needs to work on, but it's an instinctual response to past abuse. He has a mistrust of others that express interest because of that, becoming suspicious to someone's attempt at offering friendship. He's just the type of guy that works best if he's let to speak to others at his own pace.

Nobody knows much about Vitta's past, nor does he privy any to it. He was a European commoner in a Nordic country, a poor man that took up priesthood. The type of priesthood that included ghost hunting, at least. His profession allowed for him and Habit, his now ex-wife, to meet. The two instantly clicked and began sharing aspirations and it wasn't long before the two married. As they prepared for their future, Habit had introduced him to some peculiar research concerning Soul Threads. The topic was fascinating to him, beneficial even. All the weapons he could craft to make human life in Europe much easier, so that they won't have to live in fear of ghosts and depend on Angels. As his interest grew, he met Habit's research partners that shared her vision under the names of Swing Coat and Spectacles. The two were oddities to him in the way they spoke, unnerving even, but he never thought anything beyond that. He was excited to begin work to aid human-kind, but everything went south after Habit had birthed his child.

Shortly after their child's birth did Habit and her partners become demanding when it came to their research. Swing Coat pushed for human test subjects, something the others, but him, agreed on. He was exposed to the horrors his research team conducted and he was silenced from saying anything outside of the labs. He couldn't stay quiet, not after his own child began being involved in experimentation.
He confronted Habit, threatening her by exposing her work to heavenly authorities. She didn't take too kindly to this gesture, converting him into a guinea pig for her research. Habit herself instilled Immortal and Original DNA. Swing Coat applied her developing technology on him, gaining abilities similar to her. Spectacles put the nail in the coffin for Vitta, implanting Banshee Threads within him. The amount of threads packed into his body had a negative reaction that costed him his humanity. His body entered a state of rapid degeneration and regeneration, being stuck in between the living, dead, and undead. His mind was shattered and had given up on the prospect of existing.

Years went on where he stayed as a test subject, a mindless yet obedient zombie. The only thing that snapped him back into reality was the image of his son. He found a new resolve to be with him and eventually broke out of containment but not without a price. A skirmish broke out in his escape, he was to be incapacitated by rending scissors which snipped off part of an arm. Despite the loss, he was successful in his escape and went under the radar for several years. During this time did he try and recover but it was difficult integrating back into society. He was back to square one, a poor commoner who thought about pursuing priesthood once more.

As he struggled to get back up on his feet did he meet a man by the name of Bomber Jacket, someone who gave him a roof over his head in his time of need. Vitta was eternally grateful for the man, especially after he gave him a prosthetic arm. He repaid Bomber Jacket's kindness by helping the man's wife with the house, the kid, and anything else the family could think of. Though it came to the point where he felt the need to leave, that he was becoming a homewrecker as Bomber Jacket and his wife began speaking of a divorce. Although this happened with the couple separating on good terms, Vitta never forgave himself regardless of the comfort he received from the former couple.
It took time for Vitta to accept this change of events. A long time to accept the fact that Bomber Jacket fell for him and a long time to reciprocate. Warming up to Bomber Jacket did he find comfort in him. It helped him come to terms with who he was and further strengthened his resolve to get his own son back. So he can have a normal life. He couldn't stay long in Europe, though.

At some point, Vitta decided to move the two of them to America. Specifically Daten City after hearing about a little problem the Templars were dealing with. He figured he'd start his mission by joining a group close to Angels in some regard. Once they settled in Daten did he become fast friends with the more prolific members of the Templars. Especially with one Templar in particular named Handcuffs. As their friendship blossomed did Handcuffs indulge Vitta on his personal life. These little info splurges brought up a name that sent shivers down his spine, Swing Coat.
Handcuffs had revealed he was to marry her which ended up putting the two at odds with each other. Vitta then began researching Swing Coat's presence in America and through some intel did he find out about an organization with a mission to suppress her activities.

Vitta basically snitched on Swing Coat's location, bringing about the presence of Lethocs in Daten. Their arrival marked the end of Vitta's affiliation with the Templars and became a soldier for Lethocs. There he met with the strike team investigating Swing Coat: Frock and Medallion Ophir, two of her brothers, and Spurs Ironee. Their investigation brought them close to the Ophir's company, something Loungecoat and Swing Coat wanted to avoid so they silenced Frock, with Medallion and Spurs' fates unknown.
There was no time to feel defeated over losing friends or that he failed his mission, he had to hide and quick. Swing Coat had recognized him and he was certain she would call on Habit to reclaim him. He decided the best course of action was to lose Swing Coat by using the fall of the Templars as a distraction, making it seemed like a Demon claimed his life.

At the behest of Bomber Jacket did he settle down. Properly, this time. Agreeing, he became a house husband who often did volunteer work at the churches belonging to former members of the Templars. It went on like that as a routine for years, adopting twins at some point who appeared to be homeless. It wasn't until much later that he wanted to save his son, Duster, after seeing him hang out with Firgaro, one of the twins he adopted. Small world, huh.
He keeps his distance from Duster for now, preferring not to interact with him until he's confronted Habit.