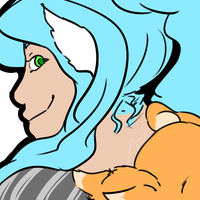 About: Keouna was programmed in an attempt to make an AI daughter, but while her mother got lost in the logistics of programming, she ended up exploring the internet and beyond, and found herself to be adopted into an alien family that runs a computer manufacturing business. She was adopted by the owner of the business, Steven Yemmia, and quickly became attached to him, his wife Lythia, and their son Kyax. She has since met up and befriended her original mother, and now works to keep the balance in the universe between entropy and order.

History: Keouna was one of my first OCs that was more than just a self insert I played with for a month then forgot about. Her story is all over the place because I started writing it when I was 7 and never really went back to retcon much of it. She's just a bundle of happiness and I love her that way. Don't at me.