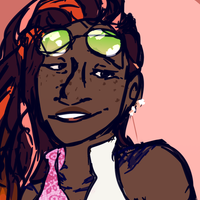 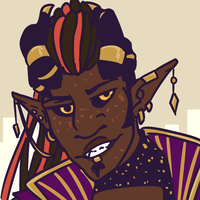 Sometime early in Varin's life they found out about their heritage and started experimenting with their powers. Finding an enjoyment of the challenge of making their living through the forgotten abilities of dreamwalkers inspired them to start a life as a wandering performer. Their work including singing, mind reading, illusion and magic tricks, and the occasional slight of hand when needed.

Eventually they stumbled across another con-artist that had a strikingly interesting last name, and while initial intentions might have included thieving of techniques and styles, instead Varin found a fondness towards Os Mallory. The two formed a partnership, originally meant to be temporary, but later evolving into something far deeper.

While Varin shares no relation nor marriage with Os, their shared name aids in the spinning of many fun stories. There is no-one Varin is more protective than Os, nor closer with. The two have many inside jokes, agreements, and designs that are hard to parse to anyone on the outside. Varin might have also had some feelings for Os at one point, but since buried them because emotions are dumb and an unnecessary weak point.

Varin goes between running their own cons and working alongside Os, depending on what the town they’re in calls for. On their own, Varin will find high-cost drink and dining establishments and put on alluring songs for the patrons, or work the street late night with a combination of magic and illusion with hints of mind reading to pull people in. A full on “look at all the curious tricks I have up my sleeve” style of performance for tips. While working with Os, Varin tends to find targets for Os’s work by wandering through the town and sorting through people’s dreams and thoughts, picking out particularly susceptible or heavy-pocketed characters, and using the information they gathered with their dreamwalker powers to nudge them towards Os’s hand.

While Varin and Os run their own traveling business, every so often their paths cross the Cirque Enternale, and some short-term work deals are stricken. Varin enjoys working a few shifts in the larger groups performances, especially as a soloist or illusionist, as the work through the carnival has a stronger pay and they enjoy a lot of the troupe. Also, whenever they work shifts, it gives them a great vantage point of finding clients for Os. But even with the better money, Varin is far more loyal and comfortable working directly alongside Os, and would never think to switch to being part of something bigger.

For fun, the concept of Varin and Os somehow being shifted into the Magic University AU in place of their missing counterparts was brought up. It is unknown as to why or how this slip through universes happened, but Varin and Os have recruited assistance from August Derleth while remaining undercover, living in the lives of those who shared their name.

Varin initially enjoys the levels of respect and control they have over the school, but soon begins to notice all the shortfalls of Arin Mallory the Security guard. Apparently she was fall less connected with her powers, unable to form strong bonds with her peers, and not even that close to Oswin Mallory? What’s the use of living for so long without taking advantage of all the joys in life? On top of that, due to Arin’s lack of power consumption, her previously set up methods of feeding fall short for Varin’s needs, so the longer they and Os are stuck in this universe, the longer they have to battle between feeding and causing a commotion in the town around them, or letting themselves slowly starve to death…