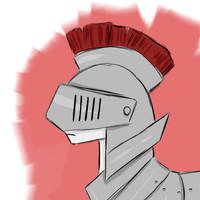 Soldiers: makes up the core of the army and consists mostly of earth ponies.

Spies: spies that enter into enemy territories to learn whatever they can, they also weed out traitors.

Armored Legion: the main force of the army in terms of strength, only the toughest of earth ponies can join.

Winged Legion: full of pegasi, due to their smaller statue compared to earth ponies they wear lighter armor.

Scouts: pegasi and earth ponies that scout out the territory and inform about enemy positions.

The  only child of a lesser noble family (his mother a pegasus and his  father a earth pony), through sheer might he managed to push up through  the ranks. He is well liked by other earth ponies for his tough and  friendly attitude though many pegasi find him boorish

A  noble pegasus who took over the title of commander from his father. He  is stern and well mannered, he takes good care of his soldiers and  values their lives making him popular.

Commander of the Scouts, Swift Strike

A  high class noble stallion, due to his families connections they managed  to get him a safer and well paid station compared to others in the  army. Swift Strike enjoys the finer things in life and see himself above  everyone else.

Earth ponies are much larger than pegasi, War Wing is a rare exception to the rule.