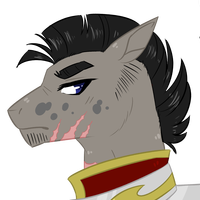 Spirit stamp: a sphere with a tail, like a comet, facing downwards with a half circle with jagged edges

Talent: Shatter Shot is so strong he can shatter the ground under his hooves, his ability to use this strength with full control is his talent

In-depth: Shatter Shot's life has not been easy, his mother used to be a high class noble pegasus from a very powerful family but was reduced to a low class noble when she married an earth pony. Dream was a very sickly, weak pegasus so she was always considered lesser than other members of her family which did not help her situation. Her   family broke all ties with her due to her refusing to agree to an arranged marriage and instead marrying Mud Dale; even when Shatter Shot was born they wanted nothing to do with any of them. Being a low class noble is as bad as being a poor commoner in the eyes of nobles; while Shatter Shot grew up surrounded by luxuries his family suffered from being effectively cast out by others and looked down upon. Most would openly laugh and comment about his poor birth and how his mother was a disappointment.

Not being a pegasus was the main cause of his troubles and because his mother was so ill he was the only  child she was able to have. If an earth pony marries a pegasus and does not produce pegasus offspring they are scorned by nobility. His parents however were content with what they had but Shatter Shot couldn't stand the way others spoke of his parents, sparking his deep rooted hatred of pegasi and the noble class. As soon as he was able to he joined the army  and fought his way up the ranks to become a commander, forcing those who scorned him to be respectful; to his face at least.

It's due to this upbringing that Shatter Shot hates the other commanders War Wing and Swift Strike; he believes that they are trying to undermine him and take his rank from him. Even though War couldn't care less and Swift somehow thinks that he and Shatter are friends despite all the evidence to say otherwise.