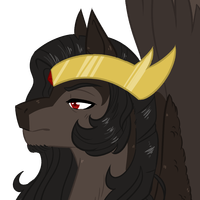 Spirit stamp: a crows skull with thorny vines curling out from the sides, a crown of red roses with blood dripping down the skull and black wings beneath

Talent: Corvus is skilled in plots, secrets and assasination

Dislikes: cold tea, coffee, children, others trying to use him, most nobles

In-depth: King Corvus was very close to his sister as she was the only one he could speak with openly, with the burden of being the Crown Prince he had few people who would speak candidly with him. His sister despite being only a few years older than him was more like a mother to him than their actual mother. His relationship with his parents was strained as they were cold and distant to both of their children. Their marriage was arranged and there was no love between them, producing an heir to the throne was all that mattered and once that was done neither of them had much contact with one another or the children. This lack of parental love from his biological parents and seeing how dysfunctional their marriage was shaped him into a cold individual. When it was revealed to him that his sister was going to be married as part of a deal, he was furious and even more so when his sister just accepted it. She never had a say to begin with but had long ago accepted that as the daughter of the royal family she would be paired off with some high class suitor. Unlike Corvus, she had no other purpose than to be married off.

Corvus was furious with her and being spiteful he cut all ties with her, even when he became king and years later when her child was born. His time as King made him stern and colder than before, ruling the kingdom without any emotional attachments. It was when his sister and her husband died in an accident that he actually saw the child she had brought into this world and he was filled with regret as soon as he looked at Skyfall. In order to try and make up for his mistakes he took Skyfall under his wing, legally adopting him which made Skyfall Crown Prince as Crovus had no children of his own. In a letter his sister had left for him in the case of her death Corvus learned of Skyfall's true nature which he struggled with but over all he had bonded with the child. He could not lose the last reminder of his sister and tried his best to push his ingrained hatred of magic to the side for Skyfall.

While still cold and aloof to others, ruling with an iron hoof, he tries to show his care for Skyfall but often he does not know know to because of his upbringing. Skyfall is the only one in his life he truly cares for and he would do anything to protect him.