Flourish, the leader of Ink Colony, has been killed. Cleverly alerts a friend and reminisces on his life. 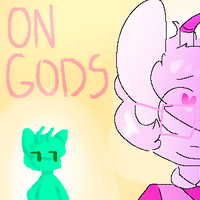 Tinte brings up some existential questions to Cleverly.

Cyrus and Narke talk to each other over an instant-messaging app. Cleverly eventually joins them.

[MM] Can of Worms

Ink Colony has committed the most heinous cardinal sin of Ant culture, and upon finding this news, Cleverly of the Clover Colony knows he can't let Tinte Ink remain in power any longer. However, Ink's got someone else on their side.

Warnings:
I don't know how to say this nicely. Not for the faint of heart.
∗ Blood/gore, described in heavy detail and a major feature of the story.
∗ Sexual themes; nothing explicit happens but heavy implications and thought process.
∗ Possessive, creepy, potentially-disturbing lines of thought.

This story is meandering and confusing to read.

You're hurt! You're full of blood!