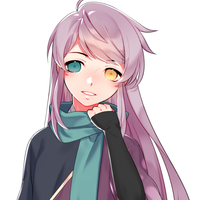 Yukito is based on the snow myth of "Yukiwarashi"  where an elderly, childless couple wished for a child and were blessed  to have one every winter, but then the child would disappear once the  snow melted. However, unlike the mythology, he doesn't disappear,  instead, he gets strangely sick that lasts through the duration of  summer, and it fades once Autumn has gotten cold enough. He met Fuyuki  and Fuyuko when they were all young, and ever since their first meeting  during the winter when they played with him, he's imprinted on them and  always stays with them; he is often seen cuddling up against them since  they are always very warm in body temperature.

Yukito  is a very shy and quiet person, becoming mute around strangers and communicating through sign language, but feels more comfortable to talk with close friends. He embarrasses easily, and will hide his face in his scarf. He is a very kind soul, and will help people who need it, even if he can't properly speak to them. His body is always cold to the touch, and thus he is always bundled up. He finds it endearing when he is mistaken for a woman.

Since he's not a human, he does have demonic powers to his disposal, but it generally involves freezing things. He can freeze/frost objects upon contact, but he can also take the moisture out of the air to create ice shards to throw as daggers. He can encapsulate people into blocks of ice, and can even freeze someone's bloodstream if he so wishes, but he is benevolent and will do no such thing unless provoked to do so. In the summertime when he is bedridden, he cannot use his powers.