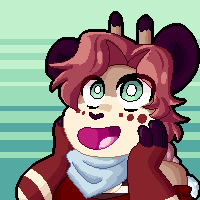 Latte wears a cream colored tank top underneath a crop top with the left sleeve slipping off her shoulder. She wears a short, blue, pleated skirt and combat boots. Around her neck, she wears a light blue bandanna.

Latte is a light brown abomination. She has slightly fuzzy ears, giraffe-like horns and a slightly furry tail with a light blue puff of hair at the end. Her nose is dark purple and slightly smaller (vertically) than the average cat, though her muzzle is longer than a cat's, feeling more like an opossum's. Her eyes are a light teal and has 3 red dots under each of her eyes with similarly colored socks on all 4 of her limbs with purple fingers and toes. She has shaggy hair that is pulled into a messy braid. Her hair is a medium-red that fades into light blue at the tip.

Latte as an animal is very similarly colored compared to her anthro form. She has short, red bangs that are thicker on her right. Her ears, horns, face, and tail are all the same as described in her anthro form, however, instead of paws, her back legs have hooves. Her legs are longer than the average cat, but her front paws look just like cat paws.