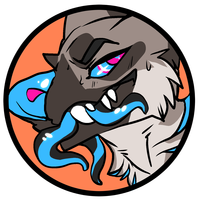 About: He grew up in a small coastal village helping the family with their farm and fishing duties. Over time, Greyjoy invested in a small sailboat to become a travelling merchant, visiting many different ports along the coast, but never ventures too far our in the open ocean. Trades mundane things from spices and fish to tools and smaller weapons. On occassion he does deal with rare and sometimes illicit herbs/mushrooms in smaller quantities.

Personality: Greyjoy is without a doubt, gifted with a silver tongue. Cunning, charming and clever, he knows just what to say to persuade others to see things his way. Loves to have small talk/chat with anyone who will lend an ear. Polyamorous/keeps multiple partners, both committed relationships and fleeting ones, from many different ports. A fisherman and melee weapons dealer by trade, travels by means of a medium sized (apx 30 foot in length) roughed up sailboat. Can have a bit of an attitude/"on edge" at times, due to constant lack of sleep/his job, but typically on the mellow side.

NSFW Details: Pansexual. Will take the sexual role whatever may fit for the situation/his sexual partners mood/just wants to have a hell of a time, will top or bottom happily. Very in tune to his partner and will listen and check in regularly, even in the throes of rougher sexual activities. Unbearably talkative. Loves being fishhooked/fingers in mouth/gills.

Dislikes: - Disrespect - Being cold - The fact that you gotta wear clothes - Insects as food